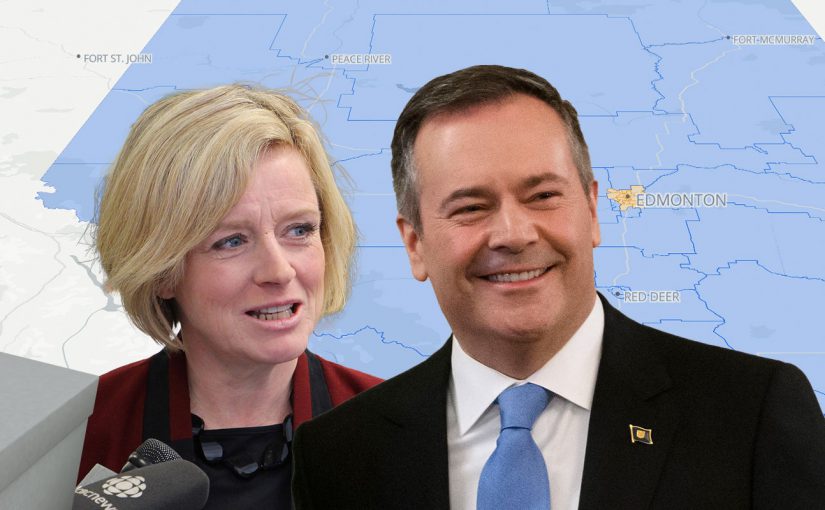 Map release day is always a good day. I’ve been griding away putting together a provincial map of the 2019 Alberta provincial election results. In this election, the newly formed United Conservative Party won a majority government under the leadership of Jason Kenney, defeating incumbent Premier Rachel Notley and the NDP.

You can browse the provincial result riding by riding and click/tap each riding to zoom in and view the results poll-by-poll at a level which describes how different neighbourhoods in Calgary and Edmonton (for example) voted in this election.

Expanding the “poll winner” control will allow you to colour code the riding polls by the strength of each party which contested the riding. Even the relative strength of parties and candidates with little hope can be discerned with ease.

A helpful tooltip that shows a pie chart of each riding – and at the poll level, each poll – can be expanded to list the candidates and voter turnout for each part of the province.

You may also find it useful to search for ridings by name or by candidate using the search bar at the top of the maps page. Each riding also shows adjacent ridings at the bottom of the page which makes it easy to browse other contests nearby.

The unification of the Progressive Conservative party and the Wildrose certainly changed the political map if you compare the results to 2015 and to 2012. In 2019, a sea of blue with one island of orange in Edmonton with a peppering of orange in Calgary and Lethbridge is the sum of the 2019 map.

So, do take a look! The United Conservative Party’s leadership race is underway after the resignation of Jason Kenney as party leader. How will the party fare against the NDP in the upcoming 2023 Provincial election? Party strategists may find these maps helpful to understand the historical context of politics in each region of Alberta and how the vote has evolved over the past decade.

On a technical note, I switched the maps over from raster to vector format meaning they should look smooth at any magnification. I hope to talk more about that in a later post. As a fun side-effect, you can also tilt the maps!

For the past week or so, when I’ve had a spare moment in the office, I’ve been working on a mapping project involving Elections Canada data and the Google Earth KML standard.  For anyone that’s worked on a political campaign or in a Member’s office, poll maps are always close by and always useful for plotting strategy for the next election.  Elections Canada provides data for drawing these polls maps, but unfortunately this data is not available in a format or projection readable by Google Earth or Google Maps.

I’ve gone ahead and translated and reprojected (after crashing my computer a few dozen times) the geographical coordinates that dileaneate the approximate 60,000 polls that make up the 308 ridings.  I’ve written software that represents these data points as polygons in Google Earth and shades them by poll winner (party) or by party vote share by poll (Conservative, Liberal, NDP, Green or Bloc).  I’ve also included an option in the software to shade the map by voter turnout.  These maps have an obvious political purpose, however, addressing low voter turnout is a non-partisan interest shared by most.

I’ve been working on writing an API to make this sort of data available to developers through a few GET requests.  I’ll keep you updated.  If you’ve got any questions, please send me an email or put a comment in the comment section below.  Here’s the demo, in all the wondrous splendor of Youtube HD.

(click the “full screen” button for the best experience)