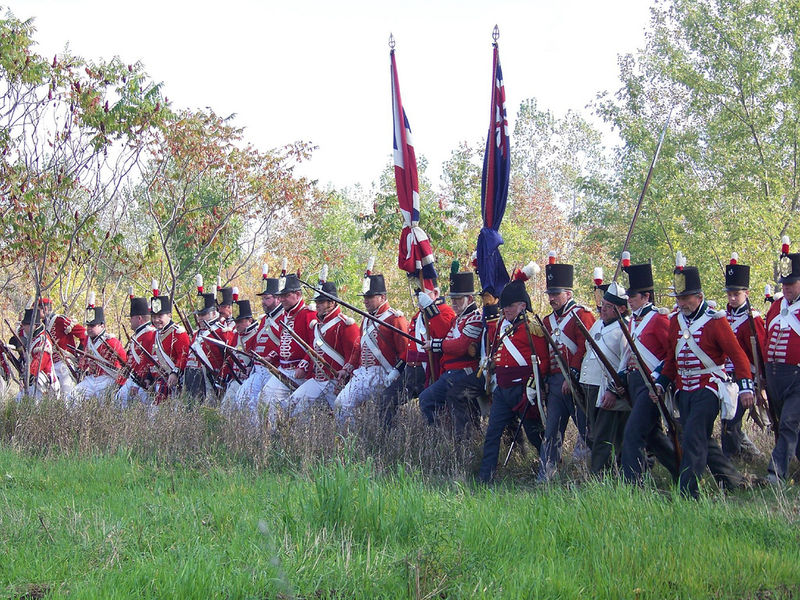 Today marks the bicentennial anniversary of the beginning of hostilities during the War of 1812. The war between the Americans and British for what is now modern-day Canada was a formative event in our history for who were are as a people, it marked a heroic win for British forces in holding the line against the American incursion, and helped defined the politics of our young country and raison-d’etre of its formation. The conflict lasted nearly three years and claimed about 15,000 lives.

Streetlamps in Ottawa are marked with banners commemorating the 200 years since the event. As a significant element of our national heritage, it is being recognized as such with a national public awareness campaign by the Minister of Heritage and Prime Minister Stephen Harper which includes new stamps and minted coins, celebrations during Canada Day, and commemorative deployment of the Royal Canadian Navy to Canadian and US ports.

The War of 1812 represents an important aspect of this Prime Minister’s rebranding of our national image at home. For years, “Canada” was based upon a Trudeaupian narrative hatched out of Ottawa from successive decades of the central Canadian establishment consensus. What made a Canadian a “Canadian” was the fact that he had universal healthcare, and had a well-funded national public broadcaster. Indeed, we were more defined by the nation-building done by our legislators, than by that done by the heroism of hundreds of thousands who put their lives on the line in defense of Crown and country.

Conservatives look to our history and see the individual heroism that defines us while liberals look to our “social history”.

In Ottawa, the chattering classes have been treating the bicentennial of the War of 1812 with disdain, suggesting that recognizing it either costs too much or that it is crass political posturing. To be sure, part of the legacy of this government will be in its recognition of Canadian symbols and history long airbrushed out by Canada’s establishment elite. Consider the push-back received when the Minister of Foreign Affairs wanted to restore the place of the Queen’s portrait in DFAIT and in our missions around the world. And what of the establishment freak-out of the restoration of the royal moniker to branches of our military despite widespread excitement among active personnel? Hundreds of thousands served their country under the “royal” designation. The government’s act was broadly seen (outside of Ottawa) as a restoration of pride. Consider too, the bellyaching heard ’round the Ottawa bubble when Conservatives passed on throwing a ticker-tape parade for the hardly notable 30th anniversary of the Charter.

The 200th anniversary of a war which helped define the formation of Canada may have happened long before 1982 when some in Ottawa believe that Pierre Elliot Trudeau granted us collective and individual rights. The perceived snub of this social history caused great consternation among national columnists and their friends in the Liberal Party, while the recognition of our men and women that serve our country with greater bravery than most of us will ever muster is seen as a waste or a spectacle.

Today, we recognize our nation-builders past and present who guaranteed the rights and freedoms that a pirouetting charlatan in a cape with a rose in lapel would later “liberate” for us to the great admiration of cynics who believe that Canada’s definition stems from governance, not from its glory.