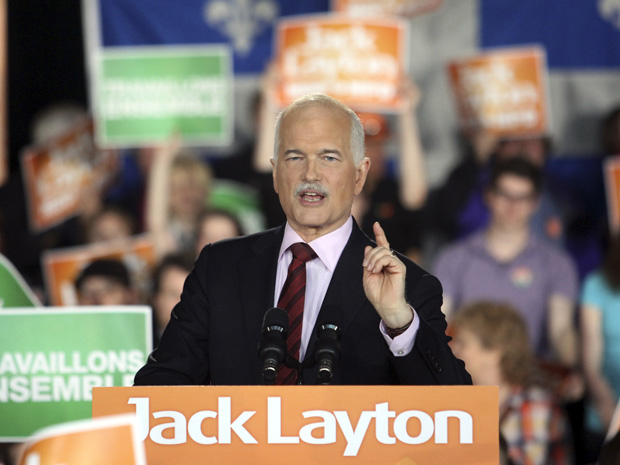 They’ve been popping organic champagne corks in the NDP war room this week as poll after poll is showing that party ahead of the Liberals in a race for second place.

The surge of the NDP seems to be most pronounced in Quebec where there are certainly more than a few former NDP staffers, thinking they were taking one for the team, who may yet find themselves with seats in the House of Commons come May 3rd.

The larger effect of all of this is of course the psychological block experienced by many on the left regarding cheating on their idealism to act pragmatic. For those that have traditionally held their nose voting Liberal to “stop Harper”, this week has been a game changer for the NDP.

What happened? Jack Layton gave phenomenal back-to-back performances in the debates. Walking into this campaign, with the visible assistance of a cane, reporters had asked him how his health would fare during a grueling 35 days while leaders crisscross the country on an intense schedule. Instead, we’ve learned that Layton may toss his cane aside by election day.

Indeed, Layton now appears to be dancing circles around the Liberal campaign led by a leader many in the press expected to do better given lower expectations set by 2 years of negative advertising against him. Instead, the Harvard professor was schooled by Layton in the moment of the English language leaders debate that was the closest thing we saw to a “knock-out blow” in those two nights. Called out for his poor attendance record, Layton asked rhetorically how Michael Ignatieff could speak convincingly on democracy if he didn’t show up for votes in the Commons.

Many leftwing voters are now asking how Ignatieff can represent their views if he’s not present for votes. And as we’re seeing in the polls, many wonder if Ignatieff can do much to stop a majority Conservative government.

The other fatal blunder for Ignatieff this week came during an interview with CBC’s Peter Mansbridge when the Liberal leader admitted that regarding a coalition, Mr. Harper could try to form government yet if he could not command the confidence of the House, Mr. Ignatieff would try to form a government with the support of the other parties, including the Bloc Quebecois. Yet most Canadians are more grounded than Ignatieff appeared to be during that interview. It is widely understood that such cooperation would come with concessions to any partner that would support the second-place Liberals in the formation of a new government. And while Mr. Ignatieff is willfully ignorant that such concessions would relate to cabinet, Canadians remember the last time the Liberals negotiated a scenario for taking power without the support of the majority or plurality of the electorate.

Canadians are going into the Easter weekend tomorrow with a few truths to consider. First and foremost, Stephen Harper will be the next Prime Minister. Second, if Michael Ignatieff cannot be counted on to stop Stephen Harper from forming a majority, left-leaning Canadians will look to the much more likable and ideological Jack Layton to oppose Mr. Harper in the 41st parliament. Third, Canadians will consider a coalition government to be explicitly on the table as Layton may be in an increased position of strength to negotiate its outcome.