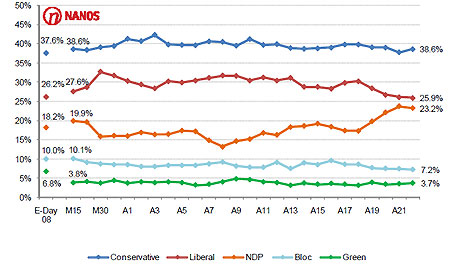 For spectators of the political Olympics, we’re now in the final sprint, the last leg, indeed the gold medal round of the competition to shape the 41st Parliament.

We’ve seen some surprises, some upsets and some tears among the competitors.

Jack Layton, the scrappy underdog, is on his way to a personal best and new team record if his current momentum holds. His main competition released a barrage of hits against him this weekend calling him an unprincipled career politician. The Liberals have been billing themselves as good sports but they’ve been throwing a few low blows of late. Word is, the old coach of the Grits, one Jean Chrétien, a 40 year career hall-of-famer in his own right, will be on the bench and will be wrapping his gloves around the neck of any oncomer that comes to challenge rookie Iggy “the Professor” Ignatieff.

The relative inexperience of the Liberal challenger has been evident in round-robin competition up to now.

Meanwhile, later this week, gameplay will be interrupted by the British Royal wedding. Look for competitors to regroup in Quebec where fans of both Brits and marriage are in relative short supply. Indeed, while English Canada is tuning into the nuptials of Wills and Kate, Quebecers will be getting a better look at Gilles, Jaques and Stephen. Layton will continue to bill himself as the hometown hero in Montreal as the Habs continue their playoff run. Duceppe will focus his fire on the new challenger to the socialist crown in the nation. Of late, the sovereignist slugger has been flailing as his gameplan has come up short. La crie finale of the Bloc will appeal to Quebecers and their identity instead of their issues.

Stephen Harper will continue to skate easy as team Grit and team Dip battle it out for the silver. To help firm up the NDP vote where it counts for the Conservatives against the Liberals, watch for additional polarizing plays by the Conservatives against the New Democrats. A strong frontal attack against Layton will rally the orange jerseys and prevent them from switching teams in the last round. Harper, the champion of the last round and favourite to win this match, owes much of his success to years of disciplined training, a strong record, and trash-talking of the Liberal challenger in the off-season. Facing a much weakened Liberal team in the final round, look for Harper to square-off against the Liberals, Dippers and Bloc as a tag-team coalition, and a desperate, reckless and unstable one at that.

While keeping an eye on gameplay on the field, watch for fans to boo the officiators of this Canadian political grudge match as election referees focus attention on rule breakers in the stands threatening the peace with their tweets and wall posts. A wave of civil disobedience will start among the spectators as they pass on the score to spectators suffering under blackout conditions.