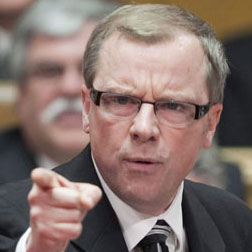 I am deeply troubled by Mr. Ignatieff’s assertion that he may choose to overturn the democratic result of the federal election.

While I understand that the scenario spelled out by Mr. Ignatieff is within the conventions of our Parliamentary tradition, the last thing our country and our still fragile economic recovery need right now is a period of instability caused by a constitutional dispute over who should be the government.

Morever, Canada is poised to solidify its position as an economic leader in a world that needs the food security and the energy security we can provide.  How can we take full advantage of this reality if we are distracted by interminable national political machinations and constitutional wrangling?

The party that wins the most seats on May 2 should be recognized as the government, period.  If that were to be the Liberals, I would join with other Canadians in accepting this result and recognizing Mr. Ignatieff as our next Prime Minister.  However, if the Conservatives win the most seats but come up short of a majority, I would expect Mr. Ignatieff and his party to accept that result.

The notion that Mr. Ignatieff may choose to not recognize the democratic result of the election and may try to seize power with the support of the other parties, including a party dedicated to the breakup of Canada, is offensive to me and I believe, to most fair-minded Canadians. Voters should choose the government, not separatist MPs.