Who do we think we are, putting, for more than eight years into limbo, the German judicial process that seeks to prosecute allegations of bribery and corruption involving the administration of former German chancellor Helmut Kohl? Schreiber faces no charges in Canada and neither does Mulroney. The only serious matter these two face in this country, is nebulous speculation and partisan interest from the Liberal Party and the Fifth Estate. Given that Schreiber charmed, offered a hypothetical bribe to a Bloc committee member yesterday, the former arms dealer seems not to show any regard for the serious charges that he faces in Germany.

Supplementary: And since when did the Liberals start favouring the idea of Parliamentary supremacy over that of the courts? 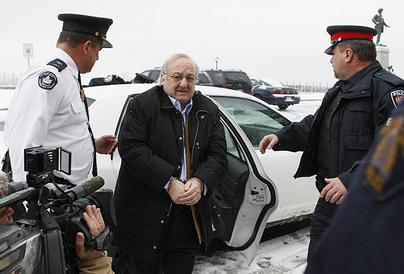 LUCK OR LARCENY?
Wednesday March 14 at 9pm & midnight on CBC-TV

In our ongoing investigation into the high incidence of insider lottery wins by retailers, the fifth estate now has obtained new evidence, in leaked documents, that show the Bob Edmonds case was far from an isolated story.

At the same time the OLG was publicly insisting that the case of the 83-year-old Coboconk, Ontario resident who had been swindled of his prize winning ticket was an anomaly, it was investigating other retailer wins and making payouts, in the millions of dollars.

CBC claims that “OLG was publicly insisting that the case… was an anomaly”.

In fact, in a news article on its website today, CBC writes:

Contrary to the Ontario Lottery and Gaming Corp.’s claims, the case of an elderly Ontario man whose $250,000 lottery ticket was stolen by a retail clerk might not have been an isolated one, the CBC has learned.

A new Fifth Estate investigation reveals that ticket retailers might have stolen winning lottery tickets before — and that the OLG might have known about it and paid out millions anyway.

The Fifth Estate obtained a leaked OLG document showing the organization has investigated similar cases of suspected insider fraud since as early as 2003.

In that year alone, the OLG was looking into six suspicious lottery claims from lottery ticket clerks whose stories did not add up. One of those six cases involved 82-year-old Bob Edmonds, the Coboconk, Ont., resident who sued the OLG, alleging his $250,000 ticket was fraudulently claimed at a local corner store.

These paragraphs lead the news story and provide the foundation of the story that the CBC highlighted in the Fifth Estate last night. The thesis of the Fifth Estate is that the OLG Corporation to this day insists that the Edmonds insider win case was an anomaly or “an isolated one”. Further the implication that an inside OLG document was “leaked” (ie. was secret) and that the OLG was somehow covering up previous investigations doesn’t quite seem right on CBC’s part.

After an investigation by the CBC’s The Fifth Estate alleged that a disproportionate number of clerks and retailers win large lotteries in Ontario, the province’s gaming corporation has defended its security practices.

“It is critical to note that when a retailer/clerk wins a major prize, [Ontario Lottery and Gaming Corporation] conducts an investigation 100 per cent of the time,” said a statement released Wednesday.

“Each case is thoroughly investigated by our internal staff. If OLG believes there is a serious concern with a lottery prize claim, the police are contacted.”

Police have been contacted four times in the past five years, said the corporation, adding that two of those instances were for information purposes.

Why was the CBC implying in yesterday’s story (and in last night’s Fifth Estate) that the OLG was publicly claiming the Edmond’s case as an isolated incident while in secret (learned from a leaked memo) calling in numerous police investigations on insider wins by clerks?

It seems that the OLG was quite upfront and public about previous investigations. Police investigations aren’t exactly hush-hush.

“We sell 225 million scratch tickets every year. Since 1999, we’ve had nine confirmed reports of potential tampering of tickets by retailers and about half of those cases were referred to the police. In at least one case, a charge was laid.”