GOP Presumptive nominee for President John McCain has caused quite a stir with his latest set of ads attacking his Democrat counterpart Barack Obama. In the first ad titled “Celeb” McCain compares Obama to Britney Spears and Paris Hilton and makes the point that while Barack Obama is incredibly popular but has little leadership experience at McCain’s level and that celebrity can’t sustain a commander in chief alone. The ad does well do underscore this point however it fails because it concedes another: Barack Obama is incredibly popular. By the technical definition of popular vote (a good measure of how elections are won — electoral colleges being another story), McCain concedes that Obama may not be ready to lead the country but that McCain isn’t ready to win the presidential election. The ad, by including Spears and Hilton to make a comparison to Obama was successful in getting a lot of intention for its at-first-glance superficial character and belittling tone.

In the second ad named “The One”, McCain’s campaign compares Obama to a messianic character that can do no wrong. The ad is mocking in tone and is good red meat for the base, perhaps the other front besides the swing vote that McCain needs to convince to give him a shot at 1600 Pennsylvania avenue.

The “Celeb” ad is rumoured to have spoiled a surprise appearance by Obama in Chicago at this past weekend’s Lollapalooza where insiders say he was ready to introduce rapper Kanye West on stage. The Obama campaign is said to have been spooked by the ad and didn’t want to fuel talk around the coming volley from McCain. Given this song by rapper Ludacris endorsing Obama over McCain (a song lighting up the American right-wing blogosphere), Obama likely made a good decision by removing himself as an element of a perfect storm of bad publicity. Obama, celebrity, Kanye and Luda. It would have fit well into McCain’s narrative (and all by chance).

The latest in this entertaining story is an entry by Paris Hilton, the famous-for-being-famous celebrity featured in McCain’s ad. First consider McCain’s ad

In election campaigns, its impossible to predict the wildcards such as the Ludacris endorsement. Further it’s the nature of the race that Obama would have to respond carefully to McCain “Celeb” ad by allegedly canceling on Kanye. Equally as unpredictable is this response by Hilton, which is more tangential to the core, but more viral among those with a surface view of the presidential race so far. While insiders will dismiss this as fodder for Entertainment Tonight and Jay Leno, though that’s where the populace is watching. And for McCain it’s unfortunate that Obama is popular.

The Conservatives just released two new ads, a television one and a radio one. They capitalize on Dion’s blunder when he said that he may consider raising the GST in the future.

You saw them here first!

There is a faux controversy brewing in the media and among Liberal bloggers about Conservative ads that ran in the last election. As all parties do during elections, money was transfered between the national party and regional candidates. Conservatives ran their air war well and it was merely one piece of the strategy that paid off for the party that would form government after the contest on January 23rd 2006. Liberals allege that local campaigns funded “national” advertising and that the national campaign funded local ads which were national-like.

In the wake of this constructed controversy, Conservatives have responded by saying that “tag lines” in advertising attributed the ads to local candidates.

The Conservatives also claim that ads tag-lined with the names of local candidates ran locally. The Liberals, however, contest this local claim and also challenge the content of the ads and whether they are local in scope.

For all intents and purposes (but somehow is not approved under the Elections Act) a party could run 30 seconds of dead air and tag the ad to indicate that it was approved by the official agent for Jane or Joe Local, the Conservative/Liberal or NDP candidate. However, section 407 paragraph 1 of the Canada Elections Act states:

407. (1) An election expense includes any cost incurred, or non-monetary contribution received, by a registered party or a candidate, to the extent that the property or service for which the cost was incurred, or the non-monetary contribution received, is used to directly promote or oppose a registered party, its leader or a candidate during an election period.

Election expenses are incurred by local campaigns. Local campaigns bought local advertising to “promote or oppose a registered party, its leader or a candidate during an election period”. So, 30 seconds of dead air wouldn’t be allowed… but, a commercial promoting Stephen Harper and/or opposing Paul Martin is certainly allowed if it is paid for and tagged by the local campaign.

The Liberals may dispute the separate nature of the advertising purchases.

Here’s a signed letter from the advertising company commissioned by the Tories during the 2005/2006 writ period. 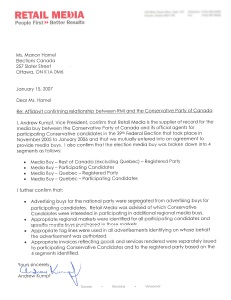 In the letter, it states:

So, the Conservative Party (national campaign) and the candidates (local campaign) were separately invoiced. It seems that all of the t’s were crossed and i’s dotted. Given that transfers of cash between local campaigns and the national campaign are perfectly legal, where’s the scandal here? Can somebody cite a section of statute or law that has been broken here?