November 1st 2009 represents the fourth anniversary of the first report of the Commission of Inquiry into the Sponsorship Program and Advertising Activities, presided over by Justice Gomery. Despite the time that has passed, we are no closer to knowing which Federal Liberal riding associations benefited from the stolen taxpayer funds or where the missing $43 million dollars highlighted by Justice Gomery ultimately wound up.

The Standing committee on Access to Information, Privacy and Ethics calls on the Auditor General of Canada to conduct a full audit of the sponsorship program to determine which federal Liberal riding associations received stolen funds and to clarify for Canadians who received the missing $43 million dollars.

As some of the air has been taken out of the so-called “Cadscam”, I thought it might be interesting to take a quick look at which communications goals were achieved by how this “scandal” was named and then let’s investigate how other scandals get their names. Further, I want to take a look at how the Conservatives are dealing with these issues during their minority government.

It seems as though every scandal that emerges in the U.S. gets the -gate suffix after the famous burglary of the DNC headquarters at the hotel which came to provide inspiration for the name. Since Watergate, we’ve seen lexicographic laziness as subsequent scandals relied on the formula by which the subject of the scandal became the root of the scandal name followed by “gate”. Wikipedia has a list of scandals based on this modèle-de-mot.

In Canada, we famously have watched the progression of “Adscam” from start to finish. Andrew Coyne — then a columnist at the National Post and now a senior editor at Maclean’s — gave the moniker to the sponsorship scandal. The scandal coiner (sorry) originally cited that he wanted to avoid the familiar -gate standby and he came to rest on a derivation of Abscam, a decades-old American political scandal that netted the convictions of a number of elected officials. Adscam, however, still registers zero on political prosecutions.

NAFTA-gate is so unfortunately named because the scandal — although up in Canada, we desperately try to claim some outrage too — is rooted in U.S. politics. If the leak was anything beyond tangential, we may have had the right to name it NAFTAscam, or Obamaramascama, but we are only secondary characters in the drama at it now simmers south of our southern border. An enterprising tech entrepreneur should immediately go and register a number of possible iteration of -gate.com and -scam.ca to cash in on the mania. As the official opposition is awol in Canada, there’ll be a scandal every week as Dion and co. focus on character assassination rather than policy opposition. Bring on Harperscam, Senatescam, and Partisanscam! In the U.S., while it is surprising to see a scandal based upon policy rather than sex, we still may see -gates reminiscent of Lewinskygate as ex-lovers and past trysts are brought to the fore (we’ve already seen a McCain sex scandal resurface that was fresh 8 years ago during the 2000 campaign).

It is interesting to note that “Cadscam” originally emerged from the Ottawa press. With Adscam so recent, it’s not entirely surprising to see this name stick. However, it is a double-edged sword for those who would carelessly wield it to damage the Conservatives. The advantage of “Cadscam” for the Liberals is that it diminishes the branding of their own scandal by creating a “politicians are all the same” way of thinking among the general public. However, the very use of the name is a constant reminder of their own scandal which ultimately brought their 13-year reign to an end. Yet, on sum I would say that it is to the Liberals’ net advantage to use the “Cadscam” name for one of the main Conservative advantages has been that they have framed themselves as the team that was elected to ‘clean up Ottawa’ and they told the electorate that ‘a new era of accountability was upon us’.

If accountability represents one pillar of this Conservative administration, this scandal has Conservatives worried because it also strikes at the very base of the other pillar: leadership. As Dona Cadman has cleared Conservative leader Stephen Harper from involvement, we can understand that perception is everything in politics and as the Conservatives clean up this mess, we see that timing and credibility are the primary factors for damage control. Of course, another key element that we have seen is pushback. Harper’s pending lawsuit against Dion is evidence of this.

Some have questioned the Prime Minister’s lack of substantive enunciation on the topic and say that he should have come forward right away to clear the air and answer any questions. Since the allegations were based on old and second-hand information, what the Prime Minister’s strategy continues to be is one that doesn’t give the intense spotlight of his office to a scandal that he cannot begin to define in his own terms. In contrast, on “NAFTA-gate”, the Prime Minister has put the full resources of his government on determining the source of the leak which impaired Obama in the Ohio primary. Some say that the PM has changed the channel on “Cadscam”, and whether or not this was deliberate on the his part, this is indeed what has happened. NAFTA-gate, as far as a news story goes, has much more momentum, involves more players, and does not have any heavy legal consequences for the Prime Minister and his team. It’s an embarrassing scandal to be sure, however, it is not one that is likely to change voter intention in the next Canadian federal election. As Canadians, I think we’re just happy that we heard our names mentioned on American TV.

If we take a substantive look at both “scandals”, the so-called “Cadscam” smells bad, but in the end it hasn’t got any legs: the three people at the centre of the allegations all denied a deal (Cadman included) and anything else is completely speculative. Unless Dion has a smoking gun, the only factor that will continue to define the story is Harper’s libel suit against the oppo leader. The Liberals might continue their pressure in the House’s ethics committee, however, they should be mindful that there is a point to be made, backed up by an easily built narrative, that the Liberals are on a witch-hunt and that they have tried to throw anything at the wall to see what sticks. On “NAFTA-gate”, there are too many speculative details for this to continue beyond the continued policy-bereft warbling of Dion in the House.

If all else fails, the Conservatives should unveil what Dion would gladly term the “hidden agenda” and dare the opposition to debate on real policy rather than trumped-up scandal. 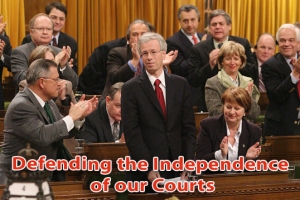