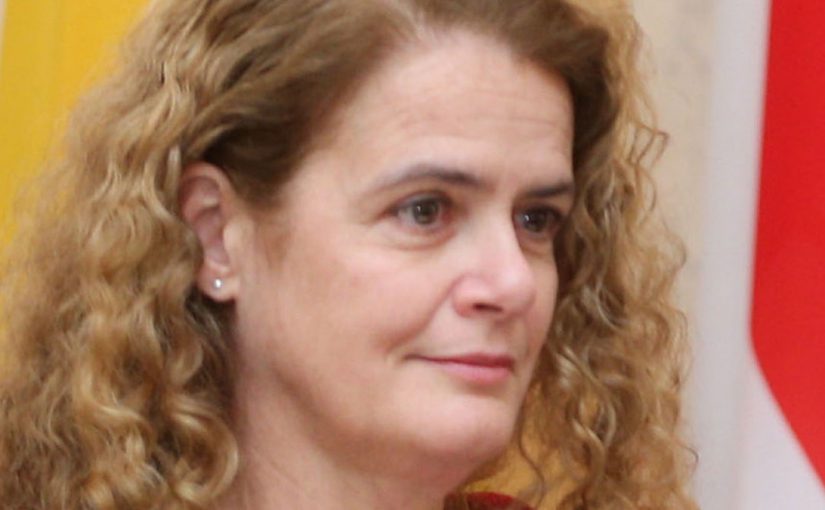 Julie Payette resigned as Canada’s vice regal on Thursday. The former Canadian astronaut was appointed by Canada’s Queen as Governor General on the recommendation of Justin Trudeau. Payette released the following statement:

“While no formal complaints or official grievances were made during my tenure, which would have immediately triggered a detailed investigation as prescribed by law and the collective agreements in place, I still take these allegations very seriously. Not only did I welcome a review of the work climate at the OSGG, but I have repeatedly encouraged employees to participate in the review in large numbers. We all experience things differently, but we should always strive to do better, and be attentive to one another’s perceptions.

“I am a strong believer in the principles of natural justice, due process and the rule of law, and that these principles apply to all equally. Notwithstanding, in respect for the integrity of my vice-regal Office and for the good of our country and of our democratic institutions, I have come to the conclusion that a new Governor General should be appointed. Canadians deserve stability in these uncertain times.

“From a personal side, this decision comes at an opportune time, as my father’s health has seriously worsened in the last few weeks and my family needs my help.

“So it is with sureness and humility, but also with pride over what was accomplished during my tenure as Governor General and in my service to the country for the past 28 years, that I have submitted my resignation. I have informed the Prime Minister of Canada of my decision. I wish him the best as he seeks an individual to recommend to Her Majesty as the next Governor General of Canada and I wish the best to my successor. I will remain at his or her disposal.

“It has been an immense privilege to serve my country and to fulfil the constitutional duties of my Office on behalf of all Canadians. I wish to extend my thanks to Prime Minister Justin Trudeau for his trust and for offering me this incredible opportunity. I would also like to thank the personnel of the Office of the Secretary to the Governor General for their work, especially under the difficult circumstances that we have known over the past months. All my gratitude also goes to the members of the RCMP who are willing to put their lives on the line to assure our protection; and to the members of the Canadian Armed Forces who have always shown tremendous respect, friendship and support. Being their Commander in chief for the last few year has been a tremendous honour. I hold them in great esteem.

“For so many Canadians, the past few months have been extremely difficult. As our country, and indeed the world, faced the reality of a pandemic, we all have had to make sacrifice and do our part to limit the spread of the virus, and to protect others, especially the most vulnerable. One cannot choose when hardship comes, but one can choose how to respond to it in times of crisis, and Canadians all over the country have answered the call. At the forefront are the health and medical personnel, essential workers, military personnel, public health officials, leaders and scientists, who have been working tirelessly to provide care, support, leadership and solutions. We owe them an immense debt of gratitude.

“I would like to conclude by conveying my sincere appreciation to Canadians for their support over the years. I have had the chance to meet, represent and celebrate the accomplishments of thousands of extraordinary Canadians from coast to coast over the past years and I will always cherish these memories. We live in a remarkable country.

It has been an honour and a privilege.”

The Rt. Hon. Julie Payette’s statement regarding her resignation

Payette is resigning after an independent review into complaints of workplace harassment and a “toxic work environment” at Rideau Hall. Some noted Payette’s mirroring of Prime Minister Trudeau’s language when he faced accusations of sexual harassment. “We all experience things differently, but we should always strive to do better, and be attentive to one another’s perceptions.” Trudeau famously remarked that in such interactions, others may experience things differently.

How much does the Governor General make and what’s the retirement package look like?

Julie Payette gives up a well-paying job in Canada’s public service. According to the Library of Parliament, the salary of the Governor General is $288,900. However, Access to Information documents obtained by the National Post in 2019, retired Governors General may claim up to $206,000 per year in office expenses after they’ve left Rideau Hall.

Who takes over vice regal duties when the Governor General abruptly resigns?

According to the law, this falls upon a special administrator. And that person is the Chief Justice of the Supreme Court of Canada, Richard Wagner. From the Prime Minister’s statement on response to Julie Payette’s resignation:

“On an interim basis, the Chief Justice of Canada will be fulfilling the duties of the Governor General. A recommendation on a replacement will be provided to Her Majesty Queen Elizabeth II and announced in due course. ”

The Prime Minister’s Office put out a press release on the happy news today,

“On behalf of all Canadians, I wish to congratulate His Royal Highness Prince William, the grandson of Her Majesty Queen Elizabeth II, Queen of Canada, on his engagement to Miss Kate Middleton.

“It would be an honour to welcome Prince William and his bride to Canada in the future and show them the special warmth and cherished traditions that are reserved for members of the Royal family.

“Once again, warm wishes on behalf of all Canadians on this special day.”

Michael Ignatieff responded to the news today when asked,

“They’re such a nice young couple, they look great, they look happy,” Ignatieff said. “Reminds me of when I got engaged. It’s nice.”

However, his views on the broader institution of the monarchy was the subject of a previous op-ed. He wrote about his wish to see the monarchy fade out,

This schizophrenia perfectly expresses the conflict between republican and monarchical principles at the heart of the constitution.

What happens now depends not on what the palace wishes, but on what the public comes to believe is right. My fervent wish is that it will regretfully but firmly decide enough is enough.

When asked about his leader-of-her-majesty’s-loyal-opposition stance, he quipped “Right now, Canadians are worried about lines for flu shots, not lines of succession.”

The NDP has not issued a statement but the NDP’s Pat Martin had the following to say (caution, it’s the Winnipeg Free Press):

“I’m more interested in the Osborne family than the royal family,” Martin quipped.

He followed it up by saying that he actually thinks Canada should ditch the monarchy long before William gets near the throne.

When the current Queen dies, it will be “time for Canada to grow up,” Martin said.

He quickly added he wasn’t sure whether that was the position of the NDP or just himself.

But deputy leader Thomas Mulcair, sitting at Martin’s side, said he agreed.

The NDP has previously shown hostility towards the idea of the Canadian Royal Family and the Queen as Canada’s head of state. At a previous policy conference in 2006, the NDP was to debate the following policy resolution,

WHEREAS under the actual Constitution, Canada is a monarchy whose Chief of State is Queen Elizabeth II; and

WHEREAS under the actual Constitution, the Governor General is the representative of Queen Elizabeth II in Canada; and

WHEREAS Queen Elizabeth II was not born nor has ever lived in Canada; and

WHEREAS in fact, the actual democratically elected Chief of state, Canadian citizen and residing in Canada, is the Prime Minister of Canada; and

THEREFORE BE IT RESOLVED that the NDP conduct an active campaign so that Canada becomes a Republic; and

BE IT FURTHER RESOLVED that the NDP conduct an active campaign to redefine the role of the Executive within the Canadian Constitution.

Yet, Jack Layton himself seems to be monarchy-positive,

Well, I think the idea of having a constitutional monarchy rather than a republic has worked pretty well for Canada. I do believe that Canadians struggle, as the years go by, with the issue of relevancy.

On the other hand I think we’ve had Governor-Generals and certainly our current Governor-General would be a good example, of someone representing the Crown- I don’t mean an individual but the phenomenon, the concept of our collective statehood- in kind of an interesting way.

I don’t hear from Canadians the sound of a stampede to make a change. It comes up from time to time. I feel that we’ve got precious amount of debate time and work time in parliament and there are a lot of issues that come before reform to the constitutional monarchy.

I won’t even ponder the Bloc’s position on this. Have Canada’s opposition parties largely shrugged off the Royal Family? Does their indifference reflect Canadian sentiment about our Queen and her heirs? Why have they given such a clear path to Conservatives to speak on behalf of this country’s tradition and identity?

The Star kicked it off and the Wicary at the Globe is trending the topic, so I might as well add my own two cents to the story.

I usually don’t report on the daily non-political lives of people in Ottawa because, well, there’s a certain line to be respected and sometime you just let people be. However, I made a particular observation about a month ago that I only then shared with friends in casual discussion, yet it now seems to inform a broader political context so I’ll share it here. I spotted the Governor General and her husband furniture shopping. Yes, Rideau Hall comes fully stocked but yet not stocked with the sort of timber that this middle-of-the-road sort of store had to offer.

So, why were the Viceregal and the Viceregal Consort shopping for furniture? With the revelation that the PM is actively seeking Michaelle Jean’s replacement, perhaps we now know the answer.

My guess as to who the PM will pick is Wayne Gretzky. The PM has made a special effort to normalize the idea of a good working relationship between himself and the Great One. Earlier this year, the PM hosted a reception with Gretzky for the Kinsmen club and hung out with Gretzky at some key Olympic events. The PM’s favourite photo ops are also said to be with athletes.

Some would point out that Gretzky’s french isn’t fantastic. He wouldn’t be the first Governor General to struggle with the language as Ray Hnatyshyn’s french abilities were also criticized.

The PM’s choice of Gretzky would be politically sound as no opposition MP or oped editorialist would find much currency in criticizing the choice.