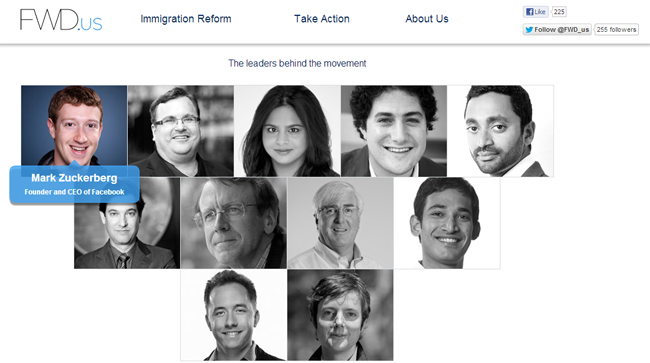 Zuckerberg is joined by executives at Dropbox, Paypal, Airbnb, Netflix, LinkedIn and Yahoo. These tech leaders believe the United States is failing to address its innovation gap by allowing the immigration system to languish. Indeed, the United States is a magnet for the type of highly skilled workers needed by Silicon Valley. FWD.us is lobbying the US government to both secure the country’s borders and to streamline the process for admitting skilled workers for the tech sector.

On traditional immigration challenges, FWD.us is also looking to the government to provide a pathway to citizenship initiative for giving status to illegal immigrants.

The FWD.us website is built on the NationBuilder platform and integrates Facebook API tools for tracking and communitizing its supporters.

What do you think of the initiative? Is this a logical move for the US tech sector? Should Zuckerberg be getting more or less involved in politics?