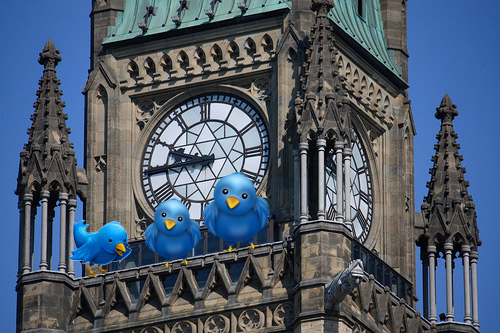 Treasury Board President Tony Clement recently remarked that Twitter is important in the public policy process. The Parry Sound-Muskoka MP has discovered its utility in his own branding; he is often cited by Hill reporters and other observers alike as the politician making the most sincere effort at using the medium to engage with the political twittersphere.

But are they his constituents? In politics, anyone who has skillfully run a successful election campaign will tell you that there are two main objectives: finding out who would vote for your candidate (voter ID) and getting these identified voters to actually vote (get out the vote). Does Twitter do either of these things?

To be sure, Twitter’s strength is in amplification. Like blogging in the middle of the last decade, the average elector is not getting their news from Twitter but those that pen the articles that this elector reads, are consuming as many tweets as they can. Twitter’s political strength in terms of votes is changing the direction of discussion among opinion leaders and those that set the narrative.

During the last Ontario provincial campaign, PC, Liberal and NDP war rooms took to Twitter often with inconsequential results. Mid-level war room staffers in their early 20s tweeting about smart-metering and tax cuts on home heating came off as insincere. Reporters had already flagged and dismissed many of these partisans as just that and if the staffers were unknown quantities, they were largely unsearched, non-retweeted and thus unamplified. Better to spend one’s time knocking on doors or making phone calls to identify hard constituent data rather than the pseudonymous. Politically, Twitter is better used to challenge preconceptions. This is done most effectively when the source is trusted and high value. And as with anything else social, authenticity matters.

Watching the Canadian twittersphere for any length of time it is easy to see that its participants mostly lean left. In the United States, one can see that a good number lean right. Why is this so? When the champion of one’s ideology occupies the government pulpit, the megaphone of office is sufficient for many. However, getting the message out in opposition is always a challenge. When mainstream options aren’t available, creative use of alternative methods becomes a necessity. When in opposition, partisans will occupy alternative media. It was true for the Canadian Conservative blogosphere when the Conservatives were in opposition; it is true of this country’s Progressive twittersphere today.

Another theory may also prove supplementarily useful. It is no secret to us conservatives that engagement with non-political but ideologically-aligned people remains one of our greatest challenges; most of our people just want to be left alone. For the left, solutions to grievances are rooted in state solutions. For the right, most look to themselves or families for answers. Advocacy and appeal for government solutions (or criticism for a lack of them) is typical of the left. There are right-wingers on Twitter, however, as citizens who look outside government for solutions, they are more likely tweeting about the hockey game or Dancing With The Stars than about the merit of cuts coming from Clement’s office. Further, Twitter is more likely to be used by younger people and by those with more free time (students and the unemployed). These demographics are also more likely dependent on — and seek fulfillment from — government assistance.

The result? Twitter viewed politically has a leftward bias in Canada. For better or worse, that’s just the way it is. For truly social-media savvy reporters, this bias is understood rather than taken as a true cross-section of Canadian life. Twitter does provide an exciting new medium for direct participation and feedback in our democracy. However, taken as a poll, it is an incomplete picture. If Twitter were reflective of reality, it would have been nationalized as a strategic resource long ago.