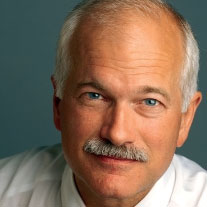 This morning I learned the terrible news of Jack Layton’s passing as the news spread instantly via Twitter. His final press conference in Ottawa this July left one feeling hopeful yet very anxious about the prospects of his return. Looking frail, weakened by a second bout of the disease, having fractured his hip during the campaign, the stomach was knotted.

And this morning, it sank. Cancer is a terrible disease, and all of us will be affected by it one day — either ourselves or with someone we love. In a pan-partisan sentiment today and in the future, Canadians are united to better understand and perhaps one day cure the many variations of this disease.

To most anyone that watches Ottawa, what goes in this city appears as bloodsport. Yet in truth it is quite a close-knit community. We are defined by our disagreements yet though we share a common desire — like most Canadians that democratically invest in this place — to make this country a better place. Though we disagree on the path to get there, we have a mutual respect and odd commonality that is an overzealous interest in the political.

Jack Layton and my friends in the NDP stand for many different ideas than I do. But I respect them because they stand for ideas and what they truly believe to be in Canada’s best interest. New Democrats are also fun to have a drink with because a discussion without disagreement is often too sober.

I feel modestly blessed to live in a country where the reaction to the passing of a political opponent is profound collective sadness.

Jack Layton was a decent man who fought passionately for his ideas. We will miss him.