Hot off the press:

SURREY, B.C. – The wife of former Surrey-North MP Chuck Cadman says she believes Prime Minister Stephen Harper had no knowledge of any inappropriate offer to her husband.

Dona Cadman says she spoke with Harper more than two years ago about the alleged offer of a one million dollar insurance policy to her husband.

In a statement to Canadian Press, Cadman says Harper looked her straight in the eyes and told her he had no knowledge of an insurance offer.

Cadman says she believed Harper and put the entire incident down to the overzealous indiscretion of a couple of individuals who were never named by her husband.

“CADSCAM” is quickly being deflated. 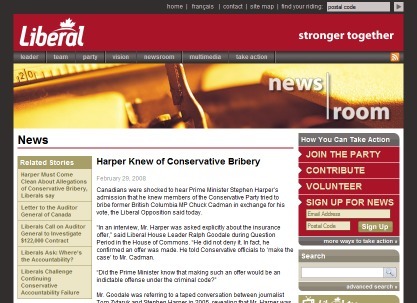