The Prime Minister’s personal numbers continue to sizzle and the latest poll shows a continuation of this trend. This latest poll final question asks for an important answer from Canadians. It’s an answer that speaks to the personality of a politician and the “main street” appeal of any candidate for the office of Prime Minister.

It’s the Harvey’s/Ipsos-Reid Hamburger poll commissioned in honour of National Hamburger Day which falls on the 28th day of this month of May.

It’s a moderately well known fact around Ottawa that Harvey’s actually is one of the PM’s favourite places to grab some food on the go and it’s of no real surprise that Harper cleans the grill (sorry) with the other contenders. 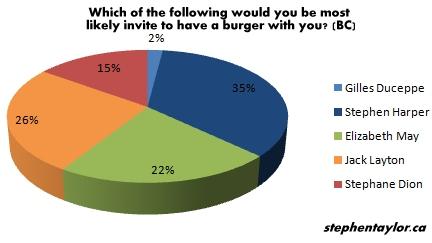 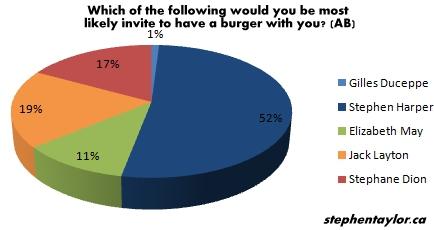 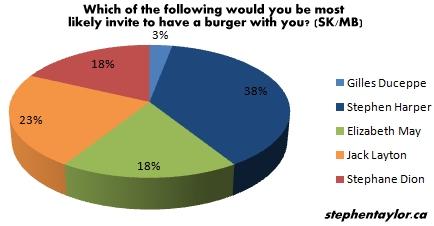 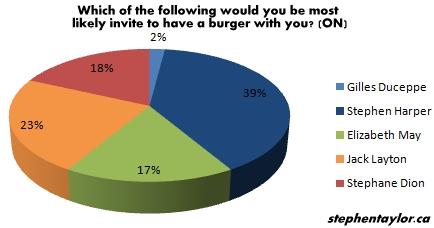 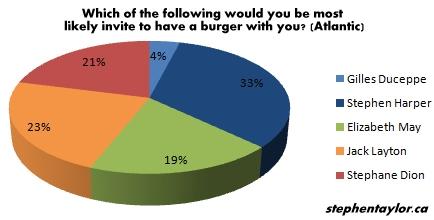 Dion comes up with a particularly poor showing. Perhaps Canadians are already aware of his hotdog-eating etiquette.

“If this gets out, it could mean the end of the Liberal Party of Canada,” warned a local politico, requesting anonymity.

And what, pray tell, has the Grits so up in arms? It seems that when Stephane Dion touched down in Winnipeg last month, he and his entourage popped by North End mega-icon Kelekis for lunch. There, Dion shocked locals and his handlers by eating Kelekis’s world-famous hot dog with – gasp! – a knife and fork.

“It conjured images of George on Seinfeld eating a Snickers bar the same way,” said another witness who, for obvious reasons, also asked not to be named.

The same poll found that cheese tops the list for favourite topping among Canadians (63%) while only 13% of Canadian eat the burger alone.