This post is all about money. It’s about those who print it, those who control it and those who donate it to the Liberal Party of Canada. In the spirit of my previous posts concerning the Board of Directors of the CBC, Via Rail, and Canada Post, I present two more Crown corporations which are headed by Liberal-friendly donors. Of course, the executive boards of these corporations are appointed by the Liberal cabinet, so this should come as no surprise in this country. But to those outside of this country… yes, this goes on, and yes, you’re right… it’s called “corruption”.

I present the proportion of donations from the current board of directors of the Royal Canadian Mint by recipient party: 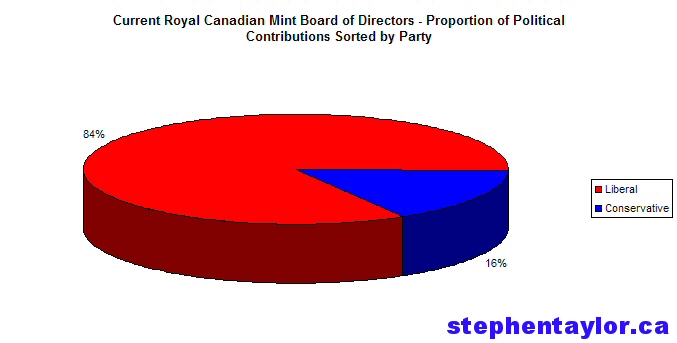 These are the ladies and gentlemen that print our money. Kids, take note… if you want to be a leader in the public sector in Canada, make that cheque out to the Liberal Party. You might just get lucky! Jobs based on merit? Only true if you’re a Liberal.

Let’s move on to those that control the money, the chaps that run the Bank of Canada. Yes, these money managers managed to donate a hefty chunk of change to the Liberal Party of Canada. In fact, out of every $100 donated to political parties by the current board of directors of the Bank of Canada, $99 went to the Liberal Party. How does the government reward these outstanding individuals? Give them a seat at on the board. Here’s a graphical representation: 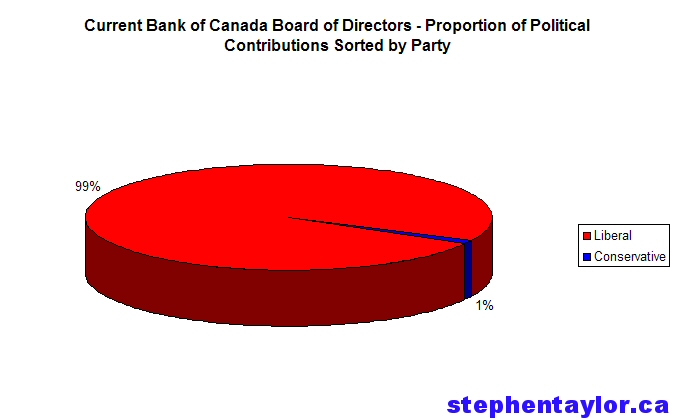 This is outrageous! Is anyone aware of the incredible partisan-based appointment of directors at our nation’s crown corporations? Tell your friends! Email them this post. I can only think of a handful of corrupt nations in which one party (or family) controls the money supply. I didn’t think that Canada was one of them. This is what is scary about politics in Canada.