Jack Layton is trying to negotiate the excision of the $4.6 billion corporate tax cut with Prime Minister Paul Martin. Cut those corporate taxes or lose NDP support on the budget vote (a vote of confidence), Martin has been told by Layton.

Let’s look at what has got Layton in a huff. 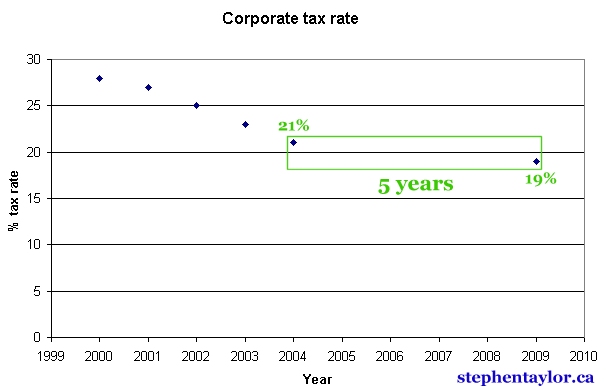 Jack Layton wants the Liberals to backtrack on a 2% corporate tax cut over 5 years. Corporate taxes have decreased 2% per year since 2001. Jack Layton wants the money reinvested into “people” and the environment. Tax cuts = Job creation. Last time I checked Jack, people like being employed. The Liberal tax cut of 2% over the next 5 years is actually quite modest given the rapid rate of decline in the corporate tax burden over the past five years. Tax relief actually keeps our small, medium and large businesses competitive with American businesses, Jack.

In fact, Garth Whyte of the Canadian Federation of Independent Businesses agrees:

Elimination of the corporate tax cuts would be a slap in the face to all small- and medium-sized enterprise (SME) owners who create most of the new jobs in every community across Canada. Prior to last year’s federal election, both the Liberal and NDP parties expressed support for creating a fair taxation system for small businesses in recognition of the important role it plays in economic growth and job creation.

In his budget, Finance Minister Goodale proposed to end the corporate surtax in 2008 — a surtax that was introduced in 1987 to reduce the deficit that was eliminated several years ago. This measure will be especially beneficial to SME owners. Finance Minister Goodale also announced a reduction in the corporate tax rate from 21 per cent to 19 per cent by 2010 — a much needed measure to reduce Canadas tax rate disadvantage compared to the U.S.

We believe that these tax measures are far too important to be used as bargaining chips for political purposes. These measures are needed to build business confidence and certainty in the country’s economic direction and to ensure that the SME sector will continue to generate economic growth and jobs — and thereby finance Canada’s ambitious social agenda.

I can’t imagine what the NDP would do if they were actually in power.