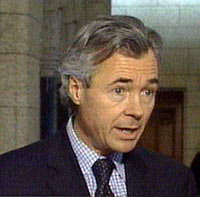 Deciding to exit politics by personal choice rather than that of the electorate, which was sure to come in the next General Election, Le Devoir reports that Pierre Pettigrew is planning to leave the federal scene for potential headship at the Organization of American States.

As I speculated earlier, Pettigrew is one of the most vulnerable Liberals in caucus given his meager margin of victory during last year’s election. He beat the Bloc candidate with by a margin of 2.77%. His mismanagement of the Arar file and the Liberals’ dwindling fortunes in Quebec make exiting ‘on his own terms’ a wise move by the current Minister of Foreign Affairs.