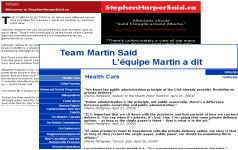 The Conservative website, featuring many quotes of Paul Martin’s Liberal crew, is much more detailed and damning than the effort put forth by the Liberals. The Liberal website features five main quotes of Stephen Harper ranging from the firewalls remark to remarks in support of our troops and in support of our allies.

TeamMartinSaid.ca includes quotes from all of the key election issues such as health care, the UN and the Iraq war.

“Team Martin” will find it difficult to attack the Conservative Party with this quote attributed to Stephen Harper “we support the war effort and believe we should be supporting our troops and our allies and be there with them doing everything necessary to win” when the David Pratt, the Liberal defence minister, was pro-war saying “I think it’s unfortunate that this is the first time where the Australians and the British and the Americans have been involved in a conflict that we haven’t as Canadians. That’s something of a precedent.” and if it couldn’t have been any clearer:

“Should the United Nations fail to accept its responsibility and enforce its resolutions, I believe that this country working with our traditional allies, the United States, Great Britain, Australia and others, should, indeed must, keep its options open in terms of participating in a coalition of like-minded countries to disarm the regime.” — David Pratt, current Liberal minister of defence

One of the more shocking quotes came from Pierre Pettigrew, the current Minister of Health on the issue of Québec after the 1995 referendum:

“I believe in the territorial integrity of Canada and of Quebec, but if Quebec becomes independent, I will then be a Quebecer.” — Pierre Pettigrew