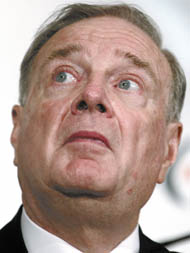 As Paul Martin dyspeptically delays and attempts to manipulate the election date to his own advantage, the latest pre-writ poll indicates that the Grits are headed into a minority government. We’ve heard of this news before, but this time the numbers have a special significance. The Liberal Party of Canada has shown a trend of dropping in support as election campaigns progress. Indeed, Paul Martin may wish that those 36 days, outlined in the law, could be shortened to perhaps one week.

The campaign will not serve Paul Martin well to allow him to stake his own ground and tell voters why he’s not the Liberal Party of Canada while telling them at the same time that he is the Liberal Party of Canada. New Coke was a marketing flop, yet unlike the drink, Paul Martin will have the same bad taste if he reverts to his classic Liberal brand.

The Liberals are at 39% of decided voters, while the Conservatives have narrowed the gap as their party stands at 31 percent. The NDP is at 17%. The Liberals are feeling pressure from their ideological constituents on the left and on the right as the NDP has become more mainstream and as the Conservative Party of Canada has become the moderate and accountable voice of the centre-right .

It may be that the Liberal Party can only sell itself to the Canadian public as “The Government”: We’re what you know. Fear what you don’t. Elections aren’t won this way. Rather this tactic is one that loses. The latest slate of attack ads produced by the Liberal Party show signs of desperation (they’re starting to think they actually might be losing).

If the Paul Martin can tell Canadians why his Liberal Party deserves another term as our federal government instead of telling us why the Conservative Party does not, then they just may form another majority. However, as the CBC’s Larry Zolf writes, Canadians are more likely to point out that the emperor has no clothes.