Sunday night, I broke the story that Garth Turner, Liberal MP for Halton was collecting funds from donors into a trust. As specified by Elections Canada, trusts are generally forbidden as one cannot pay out of a trust the many donations that went into a trust. Check the full story here.

Garth’s response was both predictable and unpredictable. Predictably, he alluded to some well-organized conspiracy that was out to get him and immediately claimed victim status. Unpredictably though, he acknowledged his mistake and has taken steps to significantly reconfigure how he will be collecting money in the future. However, there are significant questions that remain.

As Halton MP Garth Turner stands in the House of Commons and acts offended by the so-called “In and Out” scandal with which the Liberals are trying to tar the Conservatives, he may want to check his own behaviour as his own financing may be in question.

On Garth’s website, where you can donate, the following information appears: 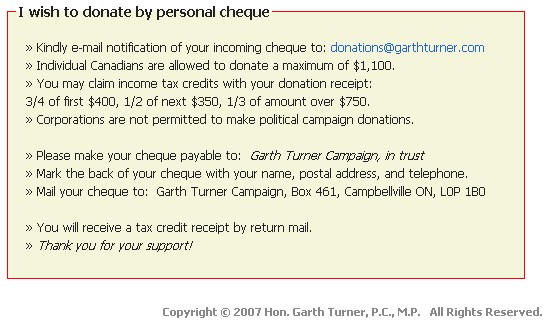 There are two questionable items in this information, particularly:

UPDATE 10/29, 11am: Garth has changed his website. It now asks cheques to be made out to “Halton Liberal Association – Garth Turner Campaign”. 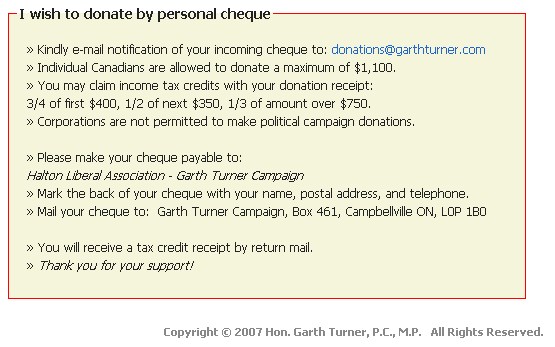 Will Garth have to return all of the cheques made out to the trust fund?

How will any donor to the trust receive a tax receipt?

Why was a trust fund set up in the first place?