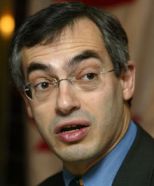 I haven’t said too much about Tony Clement’s bid for leadership and indeed, my level of attention has been paralleled among most Canadians. However, I do believe that Mr. Clement does require a closer look. The man just might clinch this race, not by his visibility, not by his organization, but by his mere unthreatening image that he poses to the leadership candidates and to all Canadians. This leadership race is becoming polarized with Tony merely floating precariously in the middle. This contest, as it is, has become a “Stronach not Harper” or a “Harper not Stronach” race.

We all know the story. Supporters of Belinda Stronach feel that she’s the most likely Ontario Tory to secure the race and they believe that a Stephen Harper victory will only reflect a Alliance takeover of the Progressive Conservatives. A Western politician, they believe, will be unelectable east of Manitoba. Conversely, supporters of Stephen Harper believe that Belinda Stronach’s inexperience in politics will present a liability to politics at home and politics abroad. The numerous admirable qualities of the two candidates each respectively outweigh the petty detractions but when the voters choose the leader, they’ll add up the negative aspects of the candidates and then decide. We should decide based on the positives, but it seems as though the negatives are more prominently etched in our minds.

So, where does this leave ‘lil Tony Clement? He’s in the unique position were he can take the high road — not by choice, but because it’s the road less traveled. He’s correct when he said yesterday that he’s everyone’s second choice. Tony’s lack of visibility and Stronach’s knack for visibility makes Tony the second choice of Harperites, while his personal non-threatening nature and Ontario Tory roots make him the natural second choice among the Belinda Boosters. Indeed, enough Conservatives may add up the negatives of the two apparent front-runners and vote Clement as their first choice. These Conservatives may also believe that in an election, Tony’s unknown yet ‘non-threatening’ image may indeed draw voters who usually vote Liberal to vote Conservative because these voters couldn’t, in clear conscience, vote for the modern-day Liberal Party of Canada. Tony could indeed be the “anybody but” vote in both the Conservative leadership race and in the next federal election. This is Tony Clement’s greatest drawing factor and he knows it.

An optimist would say that Tony Clement’s campaign has nowhere to go but up. If Tony does well in the debates, which is most likely, he may just surprise us all, himself included.

Update:I met Tony Clement at Aunt Lucy’s. Lou Grimshaw, our riding president, was nice enough to announce that I’m seeking the nomination in Kingston and the Islands. The first declared nomination contestant!