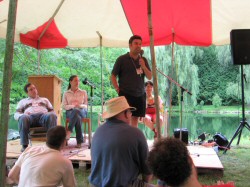 This past weekend I attended Peter Jaworski’s Liberty Summer Seminar and had the opportunity to listen to and be a part of talks given by the leading conservative/libertarian thinkers in Canada. Peter recorded eight podcasts from the seminar and I’ll be releasing them over the next couple of weeks. While this particular seminar was attended by less than 100 people, the power of the internet will allow the talk to reach thousands (my Monte Solberg/Andrew Scheer podcasts had a considerable reach).

This podcast was of a favourite seminar: the media panel. This topic is of particular interest because Conservative/Libertarian media is in the process of being born and shaped in this country, and sites such as Blogging Tories will be integral to the new media (while not replacing the MSM, it will redefine it through centralized and propagative efforts).

Remember, you DON’T need an iPod to listen (your computer’s media player will work just fine). To get set up with Blogging Tories podcasts go here for instructions.

Or… if you just want to listen to the audio file (without having to worry about other technical details), click here for the media panel seminar at the LSS.

UPDATE: Odeo doesn’t seem to like the podcast, so please use a standard podcast aggregator insteadsuch as the Blogging Tories iPodder, which can be downloaded here

What if the “establishment” was left-wing?

Yesterday I returned from a camping trip with some friends in Orono, ON. More specifically, our particular group gathered with other like-minded individuals and discussed ideas, activism and how to effectively oppose those that make the rules and those that are in power. The gathering represented various activist groups that sold either sold t-shirts emblazoned with hip slogans, gave speeches that stirred the crowd, or performed stirring songs that promoted the common agenda.

Now don’t worry, I haven’t joined the hippie hoard, but you might be surprised if I told you that everyone present found themselves firmly on “the right”.

This weekend I attended the 5th annual Liberty Summer Seminar, hosted by Peter Jaworski. The cause of the event was liberty and it was well-attended. Speakers at the seminar included Ezra Levant of the Western Standard news magazine, Marni Soupcoff of the National Post, Tasha Kheiriddin of the Canadian Taxpayers Federation, Mark Mullins (executive director of the Fraser Institute) and Gerry Nicholls of the National Citizens Coalition, among others. Certainly, the attendees were supporters and leaders in liberty and libertarian ideals in Canada. Perhaps the most notable invited guest was the one who didn’t show: Marc Emery, who faces extradition to the United States.

The event had the well intended feel and character of activism, so often practiced only on the left. Quite characteristic of the feeling of the event, one of those t-shirts sold at the event proclaimed (with a bar across the iconic Che Guevara), “Real rebels don’t support centralized state authority”. Our country has been disabled by those on the left that seek to give more power to the federal government, that seek to restrict personal freedom and reduce choice in healthcare and education.

What if “the establishment” was left-wing?

The libertarian philosophy finds itself squarely within the Conservative Party. It is often at odds with social conservatism but shares its disdain for liberalism and the gluttony of the state. Stephen Harper has also been described as a libertarian as his resume both boasts a master’s degree in economics and a stint as the president of the National Citizens Coalition. In a letter to Preston Manning, before he was even a politician, Harper advised the Reform party leader that socially conservative issues, such as abortion and traditional family values, cannot distract from the actual intentions of the Reform party, (fiscal liberty, reduced government and democratic reform).

I enjoyed the weekend incredibly and would like to thank the Jaworskis for their hospitality (and the best sauerkraut I’ve ever tasted). I represented Blogging Tories at the event and was surprised and humbled by how many of the invited speakers cited the website as a perfect example of how Liberty- and Conservative-minded individuals need to organize to take back the government in order to make a freer country for us all.