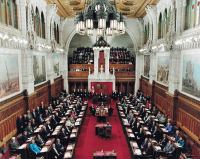 I’d just like to let everyone in on another reason why I am a conservative. I am a strong believer in senate reform. This upper house of Canadian government has power over the lower House of Commons to reject and modify its legislation. This might seem like a reasonable additional level of scrutiny for the laws of the land yet it is wholly unreasonable because this upper house is entirely unelected. Furthermore, a lot of legislation isn’t rejected; the senate is most often merely a big rubber stamp. It is the prime minister’s duty to appoint senators and thus senators are effectively the puppets of the prime minister and his predecessors. Worse, we’ve had one party in power for about 75 of the last 100 years: the Liberal party. So, the Liberal prime minister gets to appoint his Liberal friends to keep the elected house of Commons/Commoners in check. Thus the big red rubber stamp (a stamp without credibility) approves the laws determined by elected official of the House of Commons.

Over the years, there have also been scandals regarding the attendance of these non-elected legislative members of senate. However, the government of Canada reassures us that senators get penalized $250 per absent day that the senate was sitting. In the year 2000, the senators sat for 61 days. So, if a senator had decided to take the year off his pay would have been docked $15,250. This figure may be large to some but consider that senators get paid $114,200. This leaves our senator with a cool $98,950 (assuming he didn’t attend a single sitting).

The latest senator was appointed by Jean Chrétien on the day before he handed over control to Paul Martin. The new senator is Jim Munson, a former CTV reporter who worked for Jean Chrétien for a mere 16 months before getting the $114,200/year job guarenteen for the next 18 years. Roger Smith should be so lucky.

We need senate reform. We should elect our senators so that they are accountable to the people. Election would lend credibility to these parliamentarians and it would allow a true check on government. Each province should elect an equal number of senators. In our confederacy, each region is equally important. Western alienation has been a key complaint against the Liberal government and thus equal representation of each province would do wonders to eliminate this neglect of the West. Currently, Paul Martin gets input from the provinces in a non-binding annual meeting of premiers… at football games, no less. Here the premiers can complain to Paul Martin and he has the choice of listening or ignoring these leaders. Forget this meeting of Canada’s premiers over beer, wings and football. Send elected senators to Ottawa to give each province equal influence. Finally, the senate should be effective. The senate will attain this effectiveness if it is not merely the PM’s rubber stamp on legislation.