Kate McMillan did some fantastic work yesterday uncovering image manipulation by the Canadian Broadcasting Corporation on an April 19th story about the government’s sobering Kyoto costing. McMillan discovered that the CBC had cropped and applied a photoshop “dirty” filter to an image of smokestacks in Toronto to accentuate environmental damage. Not only was the juxtaposition of pollution and a story on Kyoto costing inappropriate (a less but still inappropriate image would have been a photoshopped stack of papers stamped “Kyoto” crushing the piggy bank of a Canadian family) but to manipulate an image to reflect a editorial point of view is downright unethical. The image was also used in a news story back on February 14th. 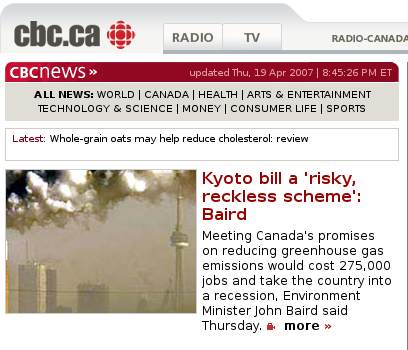 Not only is the photoshopping unethical, it violates CBC’s own Journalistic Standards and Practices:

The information conforms with reality and is not in any way misleading or false. This demands not only careful and thorough research but a disciplined use of language and production techniques, including visuals.

Integrity
The information is truthful, not distorted to justify a conclusion. Broadcasters do not take advantage of their power to present a personal bias.

Of course, this isn’t the first time that agents of news organizations have manipulated images dishonestly to exaggerate the news in order to convince others of their worldview. News organizations ought to be dispassionate observers and reporters of events and never should have an agenda of convincing the audience of the merits of any particular agenda.