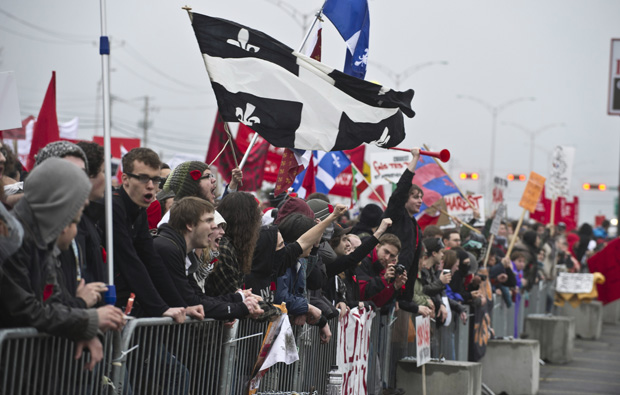 Yesterday, Liberal leader Michael Ignatieff announced that his party will no longer support the Conservative government in the House of Commons, thereby ramping up speculation of what would seem to be an imminent election.

But for Mr. Ignatieff, an election is his least-preferred outcome and I’d argue that the latest rhetoric isn’t indicative of a future powerplay for the Liberal leader, but rather of move to reset the Liberal message.

Michael Ignatieff hasn’t had a particularly eventful summer. In fact, the highly respected Chantal Hebert has noted that the Liberal leader was this summer season’s political loser as the man found it difficult to connect with average everyday Canadians on the hamburger circuit — despite liberal helpings of Grey Poupon.

After backing down terribly from his ultimatum without conditions in the spring on the immediate changes to employment insurance, Mr. Ignatieff declared victory when a study group was unveiled to look into the issue. But as anyone who has observed Ottawa political cynically knows, a commitment to study, is rather a move to defer and to delay. The highly partisan panel included known agitators Pierre Poilievre and Marlene Jennings, and these MPs rounded out by Minister Diane Finley and Liberal MP Michael Savage seemed more like headliners for a summer cage-match to entertain reporters looking for a story rather than a sincere effort by either party to move in any direction on EI. In a move which must have been highly disappointing for Liberal supporters, within the last week Ignatieff telegraphed his move away from his EI casus belli via Ralph Goodale.

Yesterday’s move seeks to remove the onus from the Liberals to “make Parliament work” — as the saying goes. Instead, that onus now rests upon the shoulders of the NDP and Michael Ignatieff surely expects that they will find a way to support the government. Indeed, much of the experience of being an opposition leader in a minority parliament is figuring out who is left holding the bag.

Michael Ignatieff — despite his academic credentials and reputation as a deep thinker — has underwhelmed on the policy front since he became leader of his party a few short months ago. Canadians — short of those in the Lesser Evil book club — aren’t familiar with the man and what he stands for and have only had the benefit of introduction courtesy of the Conservative Party’s Just Visiting ad spots. In politics, it is easy to differentiate oneself… by differentiating. And for Mr. Ignatieff, that will mean by opposing this government he is not likely seeking election, but rather something to put into the window for one in the future.

Today, the NDP indicated that yes, they are willing to “make Parliament work” and they submitted their list of demands.  Predictably, the Conservatives responded with a firm “no” to a wholly incompatible agenda and threw the NDP lot back with that of the Liberals and the Bloc Quebecois.

Were Ignatieff’s musings yesterday a gamechanger? Of course, that’s unclear at this point.  Pollster Nik Nanos stated that there are too many “moving parts” at this point to avoid an election.  But, if there is any lesson to be learned from Canadian politics in politics, there is no orthodoxy and a week — let alone a month — is a long time in politics.

If the Liberal objective is to reset their message, we await for the coming weeks with interest to see what the modern Liberal Party of Canada is all about.

No eventuality can be solely manipulated by Michael Ignatieff however, and the Conservatives will take this opportunity to craft their message as well.  As Michael Ignatieff is now perceived to be the instigator of a future election, the Conservatives have and will continue to cite Ignatieff’s arrogance (it’s all about him).  Further, if we do go to an election this fall it will be because all three opposition parties voted to defeat the government.  This will only serve to underline the Conservative message that minority parliaments are the cause of political instability and that a majority government is the only solution.  Conservatives will then ask Canadians to consider two options: a majority Conservative government versus a coalition of socialists, separatists and Ignatieffs.

The latest installment of the “will there or won’t there be an election?” drama of As the Hill Turns, the Canadian Press reports that Quebec Liberal candidates at an election readiness workshop had their election “mug shots” done — these are the official photos that Elections Canada and the media will use to report on the election (and while these are Quebec Liberals, I say “mug shots” for lack of a more descriptive term).

Will they or won’t they? — that is the question that has the media scrambling to fill their columns and air-time. Today, I was on Montreal drive-time talk radio and despite mentioning that party leaders themselves ratchet up election timing rhetoric to fundraise and to fill nominations, we still chatted about the prospects of a fall election.  I fear that I didn’t play my role and let the audience down when I explained that all of this election talk is just the empty thrill of a cheap drama.  I explained that prior to the summer break, Michael Ignatieff had just six additional nominations filled beyond his caucus compliment.  Further, despite healthier second quarter fundraising numbers — buoyed largely by Liberal leadership convention fees — the Liberals still have a steep hill to climb when it comes to fundraising.  Party leaders (or their proxies) amp up imminent election talk to create a sense of urgency that compels people to give and to act.

As for those Quebec Liberal candidate photos that were snapped — indicating that we just be going for it soon — it’s pretty standard fare, I’m sorry to say.

A summer of communion wafers, G8 photo-ops and inuktitut spelling gaffes has professional flacks looking for something else, and instead of hopping on an expensive jet to cover news where its happening, most of the bubble-locked Ottawa media are in a standard holding pattern and doing their best as bit players in a show about nothing called When is the next election?

Because perhaps when those glorious days come, they’ll have something more to talk about.