Today at 2pm, Stephen Harper, Belinda Stronach and Tony Clement will be debating the issues on CPAC. This is the final debate between the three candidates before the leadership vote on March 20th. Therefore, I encourage all Conservatives and indeed, all Canadians, to tune in.

For those of you without cable, you can watch it live online at 2pm today 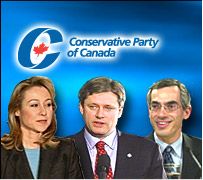 I just arrived home from the leadership debate in Ottawa and it was an interesting and enthusiastic day.

The debate was a perfect showcase for our leadership contestants and a great showcase for our party. While Belinda Stronach, Stephen Harper and Tony Clement debated the issues, there was a consensus, indeed among the audience as well, that change needs to occur in government and that Paul Martin has lost his right to rule.

Interesting notes from the debate:
Belinda Stronach started her opening statement in French and spoke confidently. She spoke with strength and poise during the entire debate and never faltered significantly. She certainly surpassed everyone’s expectations.

Tony Clement tried to show that he was in charge of the debate. He would often move the debate towards certain candidates, shifting the discussion. “Now Belinda, you assert that…”, “Stephen, I want to get back to that point”. Clement certainly had the most ease about him and he managed to share some wit as well. After listing his qualities, he rhetorically asked, “Now, who do you want for leader”, to which one Belinda supporter yelled out “Belinda!”. Tony laughed and concluded that he wouldn’t be asking anymore rhetorical questions.

Stephen Harper discussed the issues. He kept referring to his record in parliament and his role in merging the two parties. Tony Clement replied that contrary to Harper’s belief, he (Tony) and Belinda had every right to be there as Belinda was instrumental in joining the two parties together. The greatest criticism of Harper came as a concern that he will not appeal to Canadians outside of Alberta.

The Stronach supporters and Harper supporters were out in full force, filling much of the hall. Clement’s supporters had a modest showing equaling roughly one third of either the Belinda boosters or the Harperites. There were many Conservative senators in attendance and Peter MacKay was also present. Harper’s supporters in the hall were of all ages, while about 90% of Stronach’s supporters, in the hall, were under 25.

The best ideas to come out of the debate:
Belinda Stronach proposed a Youth Advisory Council where Parliamentary decisions could be guided by youth input.
Tony Clement proposed a Parliamentary Budget Office where parliamentarians could do year-round research on the fiscal numbers proposed by the Ministry of Finance.

All three candidates had a strong showing. The only clear loser appeared to be the Liberal party as the Conservative candidates underlined the Liberal scandals and arrogance every chance they got.

There was no clear winner. Every candidate seemed to perform as they needed to perform. However, I would give a special nod to Ms. Stronach. Many of her detractors believed that she would have crumbled under the parliamentary debating experience of Stephen Harper and Tony Clement. However, she continues to impress and has clearly shown today that she not only deserves to be in the race, but also deserves serious consideration for the leadership of the Conservative Party of Canada. Tony Clement also was very impressive and showed that he is indeed somewhat of a scrapper and very capable debater. Stephen Harper didn’t present anything new and, as already said, relied on his record. However, Stephen Harper did have the most to lose, so his defensive yet consistant policy positions served him well for this debate.

The leadershipship race for the Conservative Party of Canada today will feature a debate between Tony Clement, Stephen Harper and Belinda Stronach today on CPAC at 2pm. For those of you without cable I found a CPAC live webfeed. I’ve got tickets for the Ottawa debate so I’ll be reporting back here on all the details.