Chilly in Montreal today with a high/low of 12/11C. Not chilly enough for parkas, toques and for the trees to be bare of leaves on a June day. You can actually see snow on some branches. I know CBC has a whole drawer full of stock photos of anti-Israeli protests but c’mon.

The CBC is currently in ‘lockout’ mode which means that because it could not come to an agreement with its union, and therefore it has locked-out its workers pending an agreement. Everyone can agree that this move is both contentious and takes a firm position for negotiation with the union representatives.

Doing some research on another article, I tried clicking through to a few old CBC pages that were written long ago and this is what greeted me: 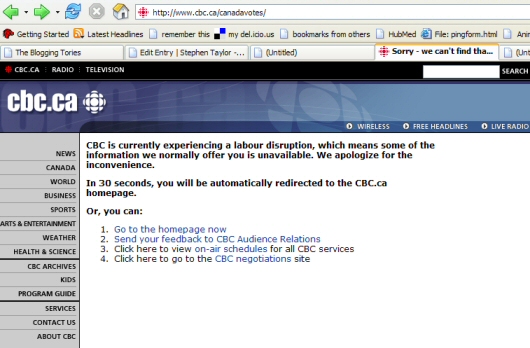 Note that on a webserver, files are static and do not require any active maintenance. ie. before the lockout, there wasn’t a unionized worker keeping the page active for $30/hr (and full dental). To remove the page would require an active effort. Also note that the CBC locked out the workers! This appears to be some odd effort by the management of the CBC to handicap its own position by interrupting its own service that was on auto-pilot anyways. I can’t explain it.