The CBC currently has Monique Bégin listed as one of two serious candidates for Adrienne Clarkson’s replacement as Governor General.

Who is Mme. Bégin?

Monique Bégin was born in 1936 in Rome under Mussolini’s regime to a Flemish mother and to father who worked as a Canadian sound engineer. The family made its way west to Spain during the early part of WWII and settled in Portuagal until they immigrated to Canada. Bégin then grew up poor in the St. Henri district of Montreal. As a consequence of her family’s poverty, Bégin was once hospitalized for malnutrition as a child. She has had numerous jobs from teacher, to executive secretary to a Royal Commission, to administrator of the research branch of the CRTC, to Trudeau heath minister. She now is a professor emeritus at the University of Ottawa.

Politically she has been described as a “feminist-activist” and her friends describe her as one who is hard to persuade once she is convinced that she is right. In a speech to the 25th anniversary annual meeting and scientific sessions of the Canadian Council of Cardiovascular Nurses, Bégin describes herself as “a feminist for as long as I can remember”.

Her policy work has centred mostly upon the public-private healthcare debate. In a recent article in Heathcare Papers (Healthc Pap. 2004;4(4):35-40), Begin favours the Romanow report over the Kirby report on healthcare reform. She writes,

“Kirby recommends, as one possibility, experimentation with private specialty hospitals or clinics. The reasoning is always tempting; however, the reality is that such an approach within a public delivery system creams off the market, leaving the heavier and most onerous cases to the state, not to mention the cases that experience complications to post-private treatment. It is also a way of introducing an element of competition in the system, another fascinating idea for some. But is competition even feasible with a single payer?”

She further describes her affinity for the Romanow report,

“I consider the Romanow exercise in value-definition to be as honest and valid as it can be, given the state of the art. It is also the first time that a truly national debate on medicare has taken place. The innovative consultative model adopted by the Romanow Commission makes it probably the Canadian Royal Commission with the most important public consultations record ever.”

Bégin also mused about the private-public debate as it applies to the Workers’ Compensation Board (WCB) in the article and offers an interesting reason for her inaction to fix the perceived queue-jumping:

“Only a certain number of workers end up as clients of the WCB in Canada. Why should these workers benefit from preferential treatment to get back to work as soon as possible (which provides them with an overall economic benefit), and not the workers who end up in our public hospitals? How does that make sense? At the time the CHA was brought into law in the early 1980s, I admit to wanting to correct this historical exception granted in past legislation to the WCB. Unfortunately, the neo-conservative times were such that I would have taken the risk of losing essential corrections of abuses had I opened more fronts in my strategy.”

Those “neo-conservatives” made her play politics with the healthcare of Canadians! Does demonizing dissent on the right by labelling it “neo-con” still work? Did it ever?

As for the present-day system, Bégin believes that “additional public funding will also be necessary. Our system is certainly sustainable and, generally speaking, Canada’s expenditures have not been out of control.”

The Canadian taxpayer might disagree as roughly forty cents of every tax dollar goes towards this “sustainable” system.

However, Mme. Bégin does rightly suggest that “we should revert to the spirit of a 50-50 cost-share arrangement” and “the federal share could immediately reach, say, 25%”. The healthcare system, as it is currently modelled, should be fixed by rectifying the fiscal imbalance.

Paul Martin is to name the new Governor General tomorrow. If he name Mme. Bégin, he’ll bolster the left-wing side of the medicare debate.

Among Madame Begin’s few shortcomings, there is one that looms large above all the others: to wit, she made Marie Antoinette look like regular gal. One who works at Wal-Mart and rides public transit. Happily.

Those of us who were Liberal staffers in the 1980s knew this well. Whenever we gathered for a post-work drink, we would trade tales about the alleged imperial tendencies of Madame Begin. Our favourite one involved her ability to go through ministerial chauffeurs the way normal people go through boxes of chocolates. She would get cross with them, and lecture them, and eventually they would quit. Tons of them. Once, we heard about a driver – who went on to toil for the laid-back Lloyd Axworthy, I believe – who was sent back to Montreal to retrieve a favourite pen. From Ottawa.

Anyway, the best Monique Begin chauffeur story involved one of these poor fellows, finally so fed up that he stopped the ministerial car on a bridge between Hull and Ottawa, as Monique fulminated in the back seat. He took the keys out of the ignition, flung them into the river below, and set off towards a happier life. Even Trudeau laughed when he heard that one.

Ladies and gentlemen, I give you our next vice-regal representative of the people, brought to you by the same folks who promised to cure the democratic deficit, win many more seats across Western Canada, and hasten a bright new day in federal-provincial relations!

The PMO has announced that Paul Martin will be naming the next Governor General tomorrow. I’ve started a pool of candidates (both good and bad) and I need your help adding to them. Please add your candidates for Governor General in the comments and evaluate the odds that I (and/or others in the comments) have placed on their candidacy. I’ll add the best good/bad/funny suggestions below. 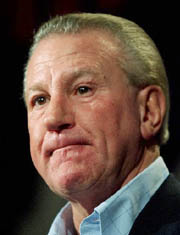