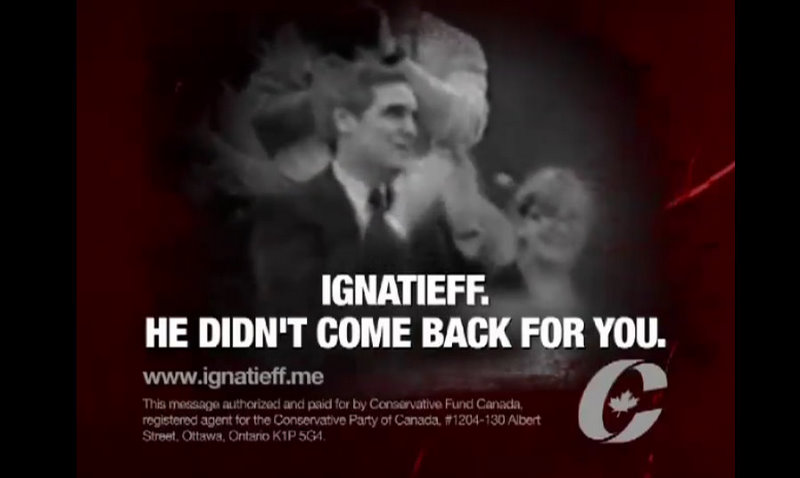 OTTAWA — The Conservative party was unable to get television commercials aimed at Liberal Leader Michael Ignatieff broadcast by the Canadian Broadcasting Corporation because the attack ads violated the network’s long-standing ban on political advertising.

The Tories approached CBC officials before the launch of the “Michael Ignatieff: just visiting” campaign and were told that an internal policy prevented the network from accepting political ads outside of times of elections.

As are other broadcasters, CBC is required to provide a share of its airtime to political parties during the writ period, but can set its own rules outside it.

“We’ll only accept political advertising like that when there is an election campaign on,” CBC spokesman Jeff Keay said. “We have generally pretty strict guidelines.”

The policy has been in place for many years and was reviewed a few years ago, Keay said.

And now tonight, on The National, the CBC gets an exclusive and gives a teaser of the new Liberal ad,

UPDATE: CBC notes that it did discuss the Conservative Party’s Trudeau ads in a larger story regarding the ups and downs of Trudeau’s first day as Liberal leader. And the ads were critiqued on the At Issue panel. A bit different than an entire (albeit short) segment dedicated to a featured teaser to be sure, but this update helps define the broader context regarding stories about political advertising/stories about advertising on CBC.

UPDATE: HuffPo publishes a lengthy piece about how I was ‘wrong’ about the CBC and its policies regarding political advertising and cite a policy change in October 2009 as proof of my terrible wrong-headedness.

I really can only go from the information that is provided publicly. One would think their published policy on political advertising would be the first and last source on this matter. Here it is. I note that it has been unchanged since May 5th, 2005 and doesn’t exist on some archived museum of public broadcasting page at CBC. We can only interpret this policy as the current one. I’ll copy it in full here:

The CBC/Radio-Canada considers it a part of its mandate as a public broadcaster to support the democratic process during general elections. The objectives of this policy are: i) to allow qualified political parties participating in a general election to present their views directly to the voters whose support they are seeking; ii) to ensure the equitable allocation of commercial time among qualified parties; iii) to satisfy the requirements of applicable laws and regulations; iv) to ensure consistent management of political advertising.

The CBC/Radio-Canada accepts political advertising messages on its main television services during federal, provincial and territorial general election periods. On its other television services and on radio, the CBC/Radio-Canada accepts political advertising only as required by the Canada Elections Act and in accordance with the allocation made by the federal Broadcasting Arbitrator.

Political advertising is sold in such a way as to ensure equitable allocation of time among qualified parties in accordance with CRTC regulations. It is scheduled in such a way as to ensure the integrity of programs and their environment. The CBC/Radio-Canada will not broadcast election advertisements that may imply, or give the appearance of, an endorsement on the part of the CBC/Radio-Canada or raise doubts as to its neutrality.

(my emphasis in bold)

Note that CBC has not updated its current official policy on political advertising since May 5, 2005 despite what some hasty revisionist PR-agents at MotherCorp would like to tell you otherwise.

Yet CBC PR suggests that their advertising policy allows for partisan advertising outside of a writ period. Curious, no?