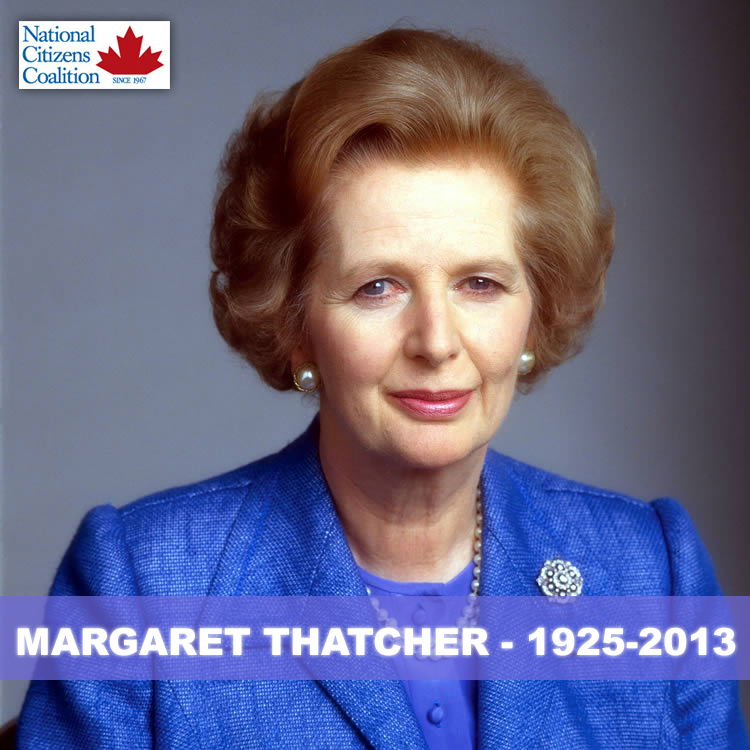 The greatest Prime Minister since Winston Churchill died this morning after suffering a stroke. Margaret Thatcher’s influence on the UK and the world is still well pronounced and conservatives are mourning her passing.

“It was with great sadness that l learned of Lady Thatcher’s death. We’ve lost a great leader, a great Prime Minister and a great Briton.

“The world has lost a giant among leaders. While many in positions of power are defined by the times in which they govern, Margaret Thatcher had that rarest of abilities to herself personify and define the age in which she served. Indeed, with the success of her economic policies, she defined contemporary conservatism itself. In 2006 I met with her in London, where she provided me wise and gracious counsel, the memory of which I will forever cherish. Laureen and I join all Canadians in saluting the proud life and legacy of Lady Thatcher.”

With the passing of Baroness Margaret Thatcher, the world has lost one of the great champions of freedom and liberty, and America has lost a true friend. As a grocer’s daughter who rose to become Britain’s first female prime minister, she stands as an example to our daughters that there is no glass ceiling that can’t be shattered. As prime minister, she helped restore the confidence and pride that has always been the hallmark of Britain at its best. And as an unapologetic supporter of our transatlantic alliance, she knew that with strength and resolve we could win the Cold War and extend freedom’s promise.

Here in America, many of us will never forget her standing shoulder to shoulder with President Reagan, reminding the world that we are not simply carried along by the currents of history—we can shape them with moral conviction, unyielding courage and iron will. Michelle and I send our thoughts to the Thatcher family and all the British people as we carry on the work to which she dedicated her life—free peoples standing together, determined to write our own destiny.

Margaret Thatcher was a great politician and a bright individual. She will do down in our memory and in history.

Thatcher was a politician whose words carried great weight.

“Our first meeting in 1984 gave the start to relations that were at times difficult, not always smooth, but which were serious and responsible for us both.

She was a great person. She did a great deal for the world, along with Ronald Reagan, pope John Paul II and Solidarity, she contributed to the demise of communism in Poland and Central Europe.

“She was an inspirational leader who stood on principle and guided her nation with confidence and clarity, Prime Minister Thatcher is a great example of strength and character, and a great ally who strengthened the special relationship between the United Kingdom and the United States.

“Laura and I join the people of Great Britain in remembering the life and leadership of this strong woman and friend.

Margaret Thatcher was one of the defining figures in modern British politics. Whatever side of the political debate you stand on, no-one can deny that as prime minister she left a unique and lasting imprint on the country she served.

“She may have divided opinion during her time in politics but everyone will be united today in acknowledging the strength of her personality and the radicalism of her politics.

“My thoughts are with her family and friends.

“In government, the UK was turned around under – and in large measure because of – her leadership. Her reforms of the economy, trades union law, and her recovery of the Falkland Islands elevated her above normal politics, and may not have been achieved under any other leader. Her outstanding characteristics will always be remembered by those who worked closely with her: courage and determination in politics, and humanity and generosity of spirit in private.

Margaret Thatcher freed millions of people to buy their own homes and buy shares in British companies.

“She ended the defeatism and pessimism of the post-war period and unleashed a spirit of enterprise.

“She fought against the clubby, cosy, male-dominated consensus of both main parties – and she won.

“Her beliefs – in thrift, hard work, and proper reward for merit – were not always popular. But her legacy is colossal.

“This country is deeply in her debt. Her memory will live long after the world has forgotten the grey suits of today’s politics.

Bob Rae, leader of the Liberal Party of Canada,

On behalf of the Liberal Party of Canada I extend my condolences on the passing of a remarkable political leader, Margaret Thatcher.

Mrs. Thatcher served as British Prime Minister for more than a decade and in many ways defined conservative politics of her time. Her sheer determination and tenacity were legendary, and even political opponents had to admire her ability to stick to the path she set out for her party and her country.

‘This lady’s not for turning’ was her own description of this powerful will, and she will long be remembered as one of the most powerful voices of her time.

Thomas Mulcair, leader of the New Democratic Party of Canada,

On behalf of all New Democrats, I express my sincere condolences to Mrs. Thatcher’s loved ones and the people of Great Britain.

Lady Thatcher was one of the most influential British politicians and world leaders of the 20th century.

Not only was she Britain’s first and only woman Prime Minister, but she is also the country’s only leader to win three consecutive terms.