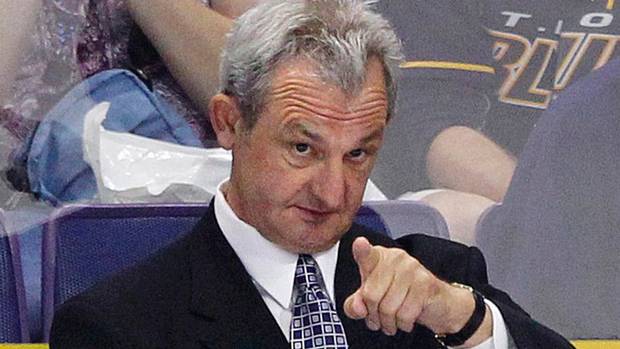 The LA Kings are heading to the White House today to receive congratulations from President Barack Obama for being the 2012 Stanley Cup champions.

The Globe and Mail writes,

Darryl Sutter – who is also the owner of a 3,000-acre ranch near Viking, Alta. – plans to weigh in on the pipeline debate when Barack Obama plays host to the reigning Stanley Cup champions on Tuesday.

Mr. Sutter might just be the first to use the Stanley Cup as a means of voicing his opinion.

For the record, the Alberta-born Mr. Sutter is in favour of the pipeline.

“Absolutely,” he said. “It’s 20 feet underground. How can we not want to keep North America [energy self-sufficient]? Why does the border have to separate that? It doesn’t make sense. For sure, I’m going to ask him.”

Sutter isn’t the first Stanley Cup champion to weigh in on pipeline politics. Last May, from the Globe and Mail:

His time on the ice yielded four Stanley Cups, two Olympic gold medals, and a reputation as a champion. Now Scott Niedermayer is hoping his winning ways will carry over into a different arena – environmental activism.

Mr. Niedermayer, who retired from the National Hockey League in June, 2010, after 18 seasons, has joined forces with the World Wildlife Fund and Coastal First Nations to oppose Enbridge Inc.’s proposed Northern Gateway project.

For their part, the Prime Minister’s Office is pleased by this morning’s reports of Darryl Sutter raising the issue with Obama. They wasted no time in firing off some talking points to their MPs and to journalists,

When Stanley Cup champion Darryl Sutter takes his Los Angeles Kings to meet President Obama today, he has vowed to deliver a message to the President – approve the Keystone XL Pipeline.

Darryl Sutter said he “absolutely” supports the Keystone XL Pipeline and that opposition to it “doesn’t make sense”.

Darryl Sutter’s decision to stand up for Canada when meeting with President Obama later today stands in sharp contrast to the actions of NDP Leader Thomas Mulcair who recently attacked the pro-Canadian Keystone XL Pipeline and Canada’s national interest on a trip to Washington D.C.

Our Conservative Government applauds and thanks Darryl Sutter for his efforts to promote Canada’s national interests and Canadian jobs on the world stage. We can only hope that NDP Leader Thomas Mulcair is paying attention.