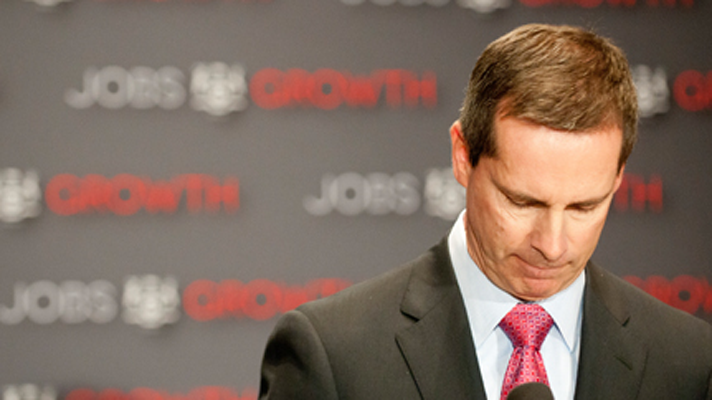 This week, Dalton McGuinty called it quits after nine tired years as Premier of Ontario. The announcement came as a surprise to all as the details came in two announcements just hours apart on Monday.

Before he stepped down as Premier, McGuinty used his constitutional powers to prorogue the legislature dodging a motion of contempt leveled against his government’s energy minister Chris Bentley who only on Monday produced an additional 20,000 pages of documents regarding the building of two new gas-fired electricity plants in Ontario. The situation is familiar for Canadians as motions of contempt — one for the failure to produce documents — were brought before the federal House of Commons against the government of Stephen Harper prior to the election which granted him a majority in 2011.

The outcome here, however, is unfamiliar. Dalton McGuinty’s government was running out of fuel. Having previously won two majority governments, the last election resulted in a minority. The gas-plant imbroglio is rooted in that previous election; cynics and neutral observers noting alike that the construction of two such plants were politically motivated attempts to secure two seats in order to guarantee that third majority. The previous by-election was McGuinty’s last hope to achieve peace and place a cone of silence over the legislature with a majority. The result was not so fortunate for the Premier.

Nothing constitutionally amiss with that, yet the reaction among Liberals, journalists, and the left has been quite muted about the issue. In 2010, we saw a Facebook group of 20,000 Canadians reach a level of national prominence after the Toronto Star decided to promote it on their front page. The Canadians Against the Prorogation of Parliament are notably silent today. In one month during that prorogation by Stephen Harper, I counted 1,561 articles written by Canada’s establishment press about this so-called affront to democracy. Perhaps predictably, and calculated by team McGuinty, the media could be distracted by something else.

Will Dalton McGuinty run for leader of the federal Liberal Party?

There was never a greater attempted ruse in Canadian politics this year than Dalton McGuinty’s attempt to deflect from the mounting corruption of his government at Queen’s Park — eHealth, ORNGE, secret deals with private energy firms, misadventures in wind and solar doubling the provincial debt and taking the province to “have-not” status in Confederation — than to leak an exclusive to the Canadian Press about the leadership team forming around Dalton McGuinty as he refused to rule out a bid for federal leadership.

The Canadian consensus media raised a five-alarm fire alarm on Stephen Harper’s constitutionally politically-motivated prorogation in 2010, while mentioning McGuinty’s as an aside in 2012. Bigger issues on the national agenda than the “fate of democracy” to be sure: the issue-challenged glam son of Pierre Trudeau was potentially being challenged by the last successful politician of the Laurentian Consensus media elite. (Gossip-hungry, issue-abstaining members of the Ottawa chaterrati will be enticed by the news that young Justin was ushered out of the Nova Scotia Liberal leader’s dinner fundraiser to be briefed on McGuinty’s retirement and possible challenge. It is reported that the young Trudeau returned to his seat looking ashen and deeply concerned. Good golly!)

There are serious issues to discuss. While Ontario has faltered on its fiscal footing, betting poorly on the dominating energy infrastructure of the first half of the 21st century and while the Canadian west is booming and preparing, building pipelines west (and eventually south) to emerging energy markets globally, the central Canadian media pines for the old times. It’s no coincidence that Liberal parties federally and in six provinces provincially are looking to elect new leadership (seven soon with Clark losing in BC). Canada is changing and looking to address new challenges and and energy- and resource-hungry world with action instead of cynical immovable inertia. Our old Liberal kings and their palace guards in the mainstream media are looking more and more like relics of another age.