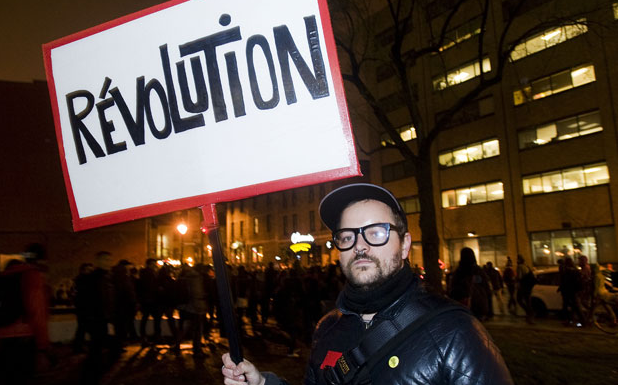 Looks like the Quebec student protesters want to reach out and disrupt a class near you. From rabble.ca, we learn of a cross-country speaking tour featuring CLASSE activists. Yes, here comes the whine and the fanciful marxist bleatings.

rabble.ca is very pleased to announce a cross-Canada speaking tour which will start at the end of this month and continue into the first week of October. We’re also incredibly thankful to the Communications, Energy and Paperworkers union (CEP), Ryerson’s Social Justice Week and LeadNow for their support.

It will feature Gabriel Nadeau-Dubois, the former spokesperson for CLASSE. The most public and visible representative of a leaderless movement, Nadeau-Dubois has been at the eye of the hurricane since the beginning of the strike. He will be joined by Cloé Zawadzki-Turcotte, a former member of CLASSE’s Executive and a key organizer behind the strike who is in fact currently on a tour in the Maritimes, and yours truly.

We’ll be talking about what happened in Quebec, but also how the hard-earned lessons of the longest student strike in Canadian history can be applied to organizing across the country. We hope to be able to build bridges of solidarity with movements in other parts of Canada, ties that are critical to mounting a truly national movement against Stephen Harper and austerity.

The dates which have been confirmed are as follows — with likely at least a couple more locations to confirm in the next few days — but it will depend on local partners and our ability to raise funds.
September 29th – London, ON

We hope you’ll join us at one of these locations, to hear war stories and learn about CLASSE’s tactics and strategies, to understand the real story behind the media spin that came out of Quebec this year, and to meet these two incredible young people who I truly believe represent some of the best and brightest their generation has to offer.