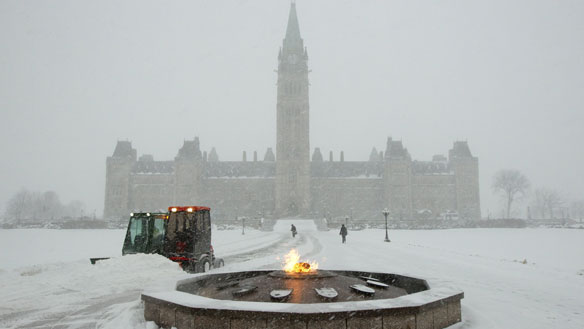 Ottawa has been covered by a fresh blanket of snow this second week of January giving the nation’s capital an idyllic calm as delegates, press, and observers gather for the Liberal binennial convention.

The party was crushed in the last general election that saw the ascendance of the first majority Conservative government in 23 years. And for a party that has held government 4 out of 5 years of the past 100, the Liberals saw many of their own littered on the landscape — the most disasterous defeat of that party in its history.

There are also some old scores to settle that are already starting to surface as a contentious race for party president is underway that is already promising to reopen old wounds.

Policy is also going to be particularly challenging as a party looks not only to oppose the current administration, but to offer its own plan to the electorate. Will Liberals end up discussing policies that widely appeal to Canadians? Will we see the next grand Liberal vision for Canada emerge? Or will we see the old standbys discussed to reaffirm what has defined the party in the past? Will the Liberal policy primarily focus outward or internally on how the party conducts its own affairs?

The party is also assessing the monumental challenge of its own finances. To appeal to the electorate is a far-off challenge. First, the party must grow its own numbers and rescue its balance from the red. The process of politicking is one discussion the Liberals must have this weekend in order to ensure their survival. Liberals are looking to tap into US Democratic methods for fundraising and building winning membership networks.

The party is describing this weekend’s effort as one of rebuilding, renewal, and reboot, however, Liberal troubles run deep and are pervasive through every thread of its institution. The Liberals do face a challenge to avoid reducing its partisans to rehash old scores, to stay away from reusing ineffective tactics to raise money and increase membership and to resist recycling old policies that don’t appeal to an electorate that has changed since the days of Trudeau, Turner, Chretien and Martin.

When the snow of this weekend melts, will the Liberal Party see the first sprouts of its renewal, or will old and wasted remnants of days past remain as Canada’s former Natural Governing Party hunkers down for a long and cold winter?