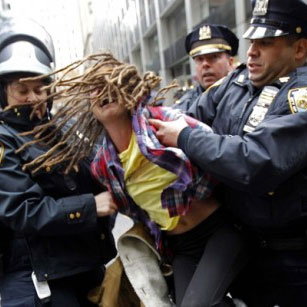 Occupiers in Toronto and Ottawa stand to be evicted from their tents today as St. James Church and Ottawa’s National Capital Commission have issued trespassing notices to those camping out in downtown parks.

I got wind of the Ottawa eviction from Rob Snow of CFRA. Snow Facebooked this rumour earlier this afternoon and sure enough, at 2:45pm an official notice was given out to occupiers in Confederation Park to vacate by 11:59pm this evening. The protesters are likely to go without much of a fight.

However, in Toronto, it seems that the 20-30 protesters are digging in.

The news media is descending upon St. James Park to capture images of the spoiled brats of capitalism behaving badly.

However, that doesn’t mean that is will be an eviction. Enter the labour astroturf. Ontario trade unions at a conference at the Sheraton on Queen street have marched down Bay street to join the occupiers. It has been reported that a few hundred have joined.

The occupiers in Toronto have also planned a hunger strike. Local eateries however will likely see a boom from the influx of well-to-do union representatives occupying the park.

Some protesters are reportedly planning on chaining themselves to the occupy site.

Canadian Auto Workers union boss Ken Lewenza tells protesters that some people are above the law,