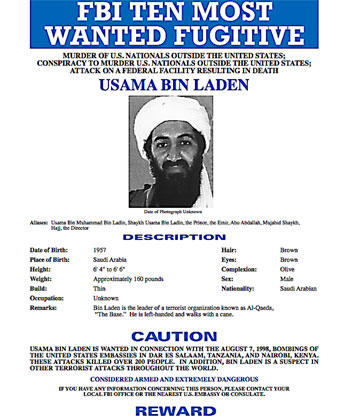 I welcome the death of Osama bin Laden, I welcome this news, and I thank President Obama and the US forces who have made this possible

The news that Osama bin Laden is dead will bring great relief to people across the world. Osama bin Laden was responsible for the worst terrorist atrocities the world has seen – for 9/11 and for so many attacks, which have cost thousands of lives, many of them British. It is a great success that he has been found and will no longer be able to pursue his campaign of global terror. This is a time to remember all those murdered by Osama bin Laden, and all those who lost loved ones. It is also a time too to thank all those who work round the clock to keep us safe from terrorism. Their work will continue. I congratulate President Obama and those responsible for carrying out this operation.

This is a resounding triumph for justice, freedom and the values shared by all democratic nations fighting shoulder to shoulder in determination against terrorism.