Angry posted on this earlier today and commented upon how the prison population overwhelmingly votes Liberal and that we’ve been paying for their ‘inking’ program. 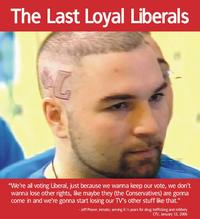 Here we see a prisoner sporting a tattoo for his preferred party.

He is quoted as saying:

“We’re all voting Liberal because we all want to keep our vote, we don’t want to lose other rights, like maybe they (the Conservatives) are going to come in and we’re going to start losing our TVs other stuff like that.”

I hope that Elections Canada made sure that they took the necessary precautions and followed the law when this prisoner voted:

166. (1) No person shall (…) (b) while in a polling station, wear any emblem, flag, banner or other thing that indicates that the person supports or opposes any candidate or political party that is listed on the ballot under the name of a candidate, or the political or other opinions entertained, or supposed to be entertained, by the candidate or party; (…)

If a person was in violation of section 166, then section 497(7) should have been enforced:

I hope that Elections Canada made sure that the law wasn’t violated. I certainly have my suspicions.