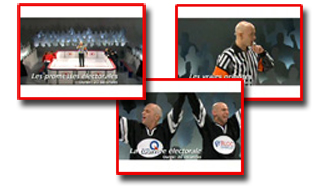 It seems like the Liberals just can’t get it right when it comes to advertising in Quebec. First, they commissioned ads for the federal government with Quebec ad firms that got paid way to much for their work. Then Sheila Fraser got word and the rest is history… (not Marc Garneau’s version though)

Now just a day after the new Liberal ads are released in Quebec, Yvon Leduc, the head of a Quebec based improv troup called Ligue Nationale d’improvisation, is complaining that the main concept behind the Liberal ads was ripped off from his group’s own comedic formula.

“I nearly fell off my chair when I saw on television the ads of the Liberal Party of Canada that plagiarized the improvisation game that we created … Morally, I find it unacceptable that people are reusing and appropriating my work to partisan ends. After the sponsorship scandal and all the ethical problems that were raised, I don’t really understand this lack of consideration.” — Yvon Leduc, LNI in a letter to Paul Martin

This new advertising controversy comes on the heels of another first picked up by the Ottawa Citizen and latched onto by the NDP on their website. The Liberal party had presented “average Canadians” heralding the accomplishments of Paul Martin’s party. However, it turned out that the actors in the commercial ranged from Liberal constituency office assistants to the brother of a Liberal MP.

First the Liberals paid too much for advertising, now they’re trying to get them made without proper compensation. In both cases Canadians got ripped off.

And you thought the Conservative ads were bad…