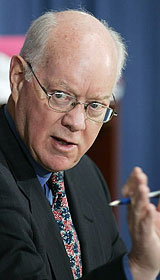 Justice John Gomery has said today that his final report will be delayed by six weeks due to the number of briefs received. The second report is expected in late February with the preliminary report expected November 1st.

In my opinion, this may translate into good luck for the Liberals as an early April election would be more temperate for uneasy Liberals to go vote for Paul Martin’s embattled party. If the election had been held in late February instead, Liberal voters would have been less likely to make the trek to the polls, while Conservatives should be able to count on their determined base no matter the season.

I envision three scenarios: the government could fall before or after the report to straddle possible election dates around November 1st or the election will happen when Paul Martin calls it in late February after Gomery’s second report. Of course, the Liberals would prefer an apparent Tory/Bloc collapse of the government for an election before the first Gomery report is released. The Conservative’s ideal election date is about three weeks after November 1st (time enough for the Gomery details to sink in).

While the parties are sure to detail their plans for implementing Gomery’s recommendations if an election is called for early April, a building issue will be energy no matter when the election is called. One major fight will be whether tax cuts on fuel (Conservative plan), or nationalization of the oil/gas industry (Liberal plan) is more appropriate for providing relief to the Canadian energy consumer. This will add to the acerbic nature of what is sure to be an intensely vicious election campaign. Of course, nationalization is merely conjecture at this point but we’ve already seen evidence of Liberal trial balloons (with the Leger Leger poll for example).

However, the Gomery report is going to be the central issue, whenever the election is called. The Liberals and Conservatives will try to sell themselves to the public as the best equipped to implement change. However, even if I try to form a non-partisan view, I cannot imagine how the Liberals will appear better suited for the task.

One thing is for sure as a result of today’s announcement. Gomery’s delay will have Liberal and Tory strategists adjusting their long- and short-term plans.