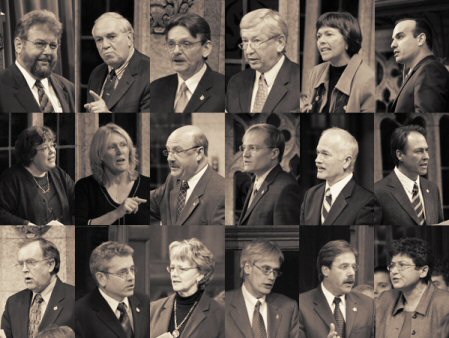 The NDP caucus could hardly be described as “youthful”, except maybe for this guy:

I have come to the conclusion that the NDP (and similar socialists) have a political philosophy that is based upon two common fundamental beliefs: that our society is wrong, and that it must be changed. Consider the status quo approach to any issue and the NDP has fought, or is fighting, for society to change it (e.g. environment, labour, marriage, economy, defense etc.)

I think that the NDP stereotypes young people as naturally contrarian (ie. rebellious adolescents). Most of my peers do have concerns about society, however, their concerns are rooted in whether or not they’ll be able to make a good life for themselves and their families and whether or not their families will be safe in their communities and in the world. We’re a lot more mature than the NDP would wish us to be.

CORRECTION: Daveberta has pointed out that I misplaced NDP MP Nathan Cullen who is actually 33. Upgrade that youthful NDP total to 2 MPs. Huzzah!