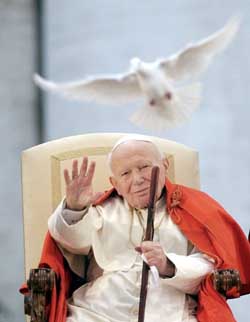 The papacy of Pope John Paul II is coming to an end during these sad and reflective days. As an outsider to the Roman Catholic Church, I believe that God has blessed us all with the life and kind spirit of this inspirational man.

He was a Pope who reached out to all, regardless of faith. During his papacy, John Paul II reached out to the Jewish people, to Muslims and to many others of many other faiths. John Paul II also extended an open hand to Anglicans and Orthodox Christians as these practices of the Christian religion now experience a renewed closeness with Catholicism.

I cannot attempt any extensive comment, with any justice, on his accomplishments or ministry. However, in these final hours of his remarkable and beautiful life, I feel the sadness of those who are indeed losing a father and I believe that, in our common humanity, we are all losing a friend.