Palestinians are ‘perplexed’ at Richard Gere’s public service announcement broadcast on palestinian TV. “Get out and Vote”, he implores. 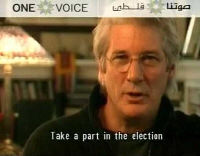 “I don’t even know who the candidates are other than Abu Mazen (Mahmoud Abbas), let alone this Gere,” Gaza soap factory worker Manar an-Najar told Reuters.

While we should applaud Gere for his positive message, he is quite presumptuous to believe that his celebrity is universal and that it confers a level of authority in any political forum. Every person is entitled to their political views and causes, however, I would argue that people perceive Hollywood intervention as conceited and without credibility. People detect condescension whenever a pampered celebrity — without the benefit of experience, or the desire to stand for election — lectures them to do what is right, even if it truly is.

Gere has visited the Middle East several times during the past year “just educating himself” about the region.

Conclusion of Gere’s fact-finding-mission: “Voting is good. I should tell these lovely yet ignorant people (without my help and experience) that they should vote!”