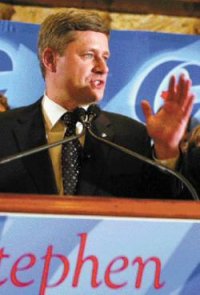 The Harper Express pulled into Montreal yesterday to address a crowd of about 500 people in a downtown hotel.

Harper underlined one of the key points of conservatism which is the even and fair distribution of power to the provinces. Yet, the preservation of the French language across Canada, in all of its federal institutions will be maintained.

You have my word. A government led by Stephen Harper will always believe that French in Quebec and elsewhere in Canada is a national priority.” — Stephen Harper, leader of the Conservative Party of Canada

The voters of Québec are seeking to dethrone the Liberals after sponsorship scandal has unfairly cast a shadow over that province. The voters there rightly believe that it is rather a Liberal scandal instead of a Québec scandal. However, the electorate is looking towards their usual voice of protest, the Bloc Québecois. Many Quebeckers are torn over how best to boot the arrogant Liberal party from office. The Bloc still maintains sovereignty as a principal policy position, yet many voters, who believe in Canada, see that party as the only viable option for removing the Liberal party from power.

Indeed, voters in Quebec are voting against the Liberals rather than voting for the Bloc. Gilles Duceppe remarked that while the Bloc cannot form the government, elections aren’t about win or lose; elections are about voters voting for people to represent constituents. Sovereignty is a dead topic in Quebec and Quebeckers may come to realize that their issues are being addressed and their values defended by Stephen Harper. Therefore, voters in that province may just vote for their true voice of opposition to the Liberals in Canada: the Conservative Party of Canada.