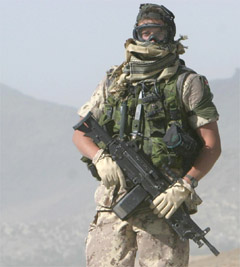 In Afghanistan, where our armed men and women are fighting the war on terror, a surprise came this week. The ‘relish-green’ uniforms are now merely a choice for Canadian troops (depending on the type of operations). The Canadian soldiers in Afghanistan have finally received their long overdue desert camouflage, which is as Col. Alain Tremblay, commander of Canada’s army in Afghanistan puts it “safer and more comfortable”.

Indeed, the new uniforms will allow our troops better cover in the desert regions and within the mud-walled cities of the country.

Better late than never but why did the uniforms have to come so late? Have the Liberals really budgeted so little as to provide decent uniforms merely 2.5 years after the Afghanistan operation started?