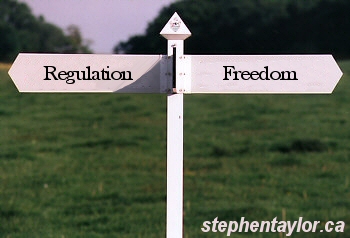 I’d like to pose a simple question: “Could the Canadian government censor the Internet?”

Now, depending on your political leanings you might respond, “you Conservative wacko conspiracy theorist, the government wouldn’t do that!”

However, consider that the government already regulates the content of television and radio through the CRTC. The government body has the power to pull a station’s licence if they don’t play enough Canadian content or if they happen to be quite outspoken against the government in Quebec (see: ChoiFM). The Canadian government has incredible power over magazine publishers and think-tanks as well as these groups receive millions of dollars of government grants and support. Many Conservative think-tanks (e.g. Fraser Institute) and magazines (e.g. the Western Standard) are proudly independent of government subsidy and thus do not have to worry about publishing contrarian opinion and getting their funding cut.

In a discussion with Gerry Nicholls of the NCC over the weekend, we discussed the gag laws and the dissemination of Liberal-harmful news and message over the internet. Considering Jean Brault’s publication ban failure and the eventual NCC election gag law loss in the Supreme Court of Canada, Gerry mused that the Internet technology may have caught up with political censorship and thus gag laws have become pointless.

It is actually possible to censor the internet in Canada. The government would merely require that Rogers/Cogeco/Telus/Bell include a couple of lines of code within their global settings on their networks. The government can require that these companies ban connections to certain IPs or even ban pages automatically with certain keywords.

“But they only censor the internet in repressive third world countries”, you might say. However, consider that I, along with several Blogging Tories, and Brian Neale of Nealenews were facing potential charges for breaking the Jean Brault publication ban and consider that this very ban on Internet linking (!) is a circumvention of our right to free speech. Now consider that the Internet is the only unregulated medium in Canada (satellite television signals, that float through the air, are also regulated for CRTC-approved content). Also consider that more and more people get election news from the internet and that blogs will be front-row-centre(-right) during the next election. Furthermore, trends such as these mean that the government will either make a globally embarrassing move to regulate “the great democratizer” that is the Internet, or it will make no move at all. If the latter is true, government pressure on broadcast TV, radio, satellite, thinktanks and magazines will become less relevant as the Internet provides more freedom of information for all Canadians.