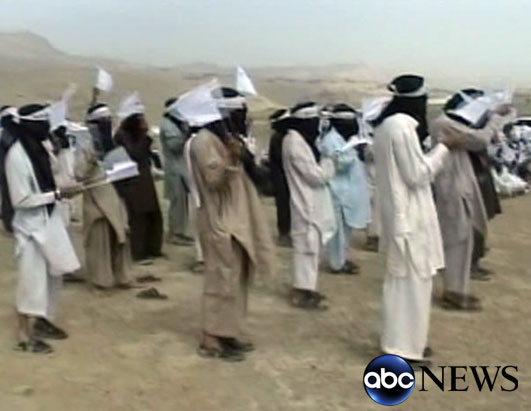 From the second last page of an Al Qaeda training manual found in Manchester England from a terrorist safe-house:

IF AN INDICTMENT IS ISSUED AND THE TRIAL BEGINS, THE BROTHER HAS TO PAY ATTENTION TO THE FOLLOWING:

When taken into Afghani custody, did the al Qaeda training take over? Curiously, detainees did not claim torture at the hands of Canadians, but only by Afghani jailers. Detainees are only held by Canadian Forces for at most 96 hours before being handed over to Afghan authorities.

Of course, this does not absolve Canada from their duty to protect the human rights of even the most despicable human beings. However, we should be aware that claiming torture is standard operating procedure for those trained by, or in association with al Qaeda.

The Globe and Mail’s Graeme Smith has been covering this story all week from Kandahar and details horrible accounts of abuse in this article.

I suspect that the truth lies somewhere in the middle: I suspect the claims because the Taliban have been trained to claim such mistreatment while imprisoned. However, the Afghan prison system is one of the last places where I’d want to be incarcerated.

The Canadian government is also trying to balance a couple of important objectives here. They must help the Afghani state to stand on its own two feet, and this includes the establishment of a prisons/corrections department of the government. But, they must balance this with being cognizant of human rights.

Consider this from an interview with Afghani ambassador Omar Samad from CTV NewsNet:

“We don’t kiss murderers, and I’m not saying that anyone who is detained is a murderer, but we are dealing with very vicious dangerous people. Every day we are facing normal citizens being beheaded, normal citizens being blown up, your soldiers being attacked, other soldiers that are being attacked. We’ll not tolerate that. At the same time we are trying to bring rule of law to Afghanistan. Justice system that works in Afghanistan. And so we are working on those things. If there are problems we’ll try to correct them as soon as possible.” — Afghanistan’s ambassador to Canada, Omar Samad

This point brings me back to an earlier thought. While the opposition is coming down on the mission in Afghanistan, showing concern for Taliban detainees, they are driving a wedge through the support of the Canadian electorate for a effort to establish and maintain human rights for millions of Afghanis, including women and children who for many are only experiencing their rights for the first time. We know that the opposition opposes the mission in Afghanistan. However, on the issue of rights I feel that Dion and Layton are throwing the baby out with the bathwater by trying to sink the Conservatives on the issue of detainees.

The news is inherently foggy as it deals with accounts from some unsavoury characters. One example has emerged from Smith’s story that I link above. Smith quotes Sadullah Khan, the Kandahar NDS chief and senior administrator of the system where most of the torture is alleged to have taken place.

However, in a release today, the Afghani embassy in Ottawa issued a release questioning that particular detail of Smith’s report:

“NDS officials also confirm that their employee rosters for Kandahar do not show any person named Sadullah Khan as having been employed by the agency in the past year. They also clarify that the person in-charge of NDS in the province is a person by a different name.”

One thing is certain, we do not have all of the details and those that we have are questionable, at best. The Canadian government has its own capacity to investigate and I’m hopeful that they are doing what they can to clarify, and if necessary, remedy the situation.