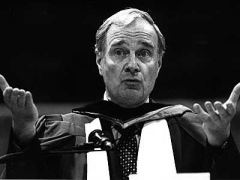 The Auditor-General’s report came out Tuesday afternoon and it is quite damning to the Liberal Party. Auditor-General described Liberal government abuses as ‘outrageous’. The word ‘fraud’ appears in the document detailing the $250 million in advertising programs and sponsorships that were channeled through Liberal party supporters who had a take-home share of $100 million.

Now 13 cases involving these payments are now under criminal investigation by the RCMP, who, ironically, did not escape controvery within the report.

“This is just such a blatant misuse of public funds. It is shocking … Words escape me,” — Sheila Fraser, Auditor-General

Today, Paul Martin responded to the report saying that he had nothing to do with it. He claims that a “sophisticated” group of insiders was responsible for the “fraud” as Ms. Fraser labeled it in her report.

Indeed, about $100 million was paid to Liberal Party donors and their advertising companies. This totals 40% of the advertising budget which was intended to boost Canada’s image in Quebec after the 1995 referendum on sovereignty there.

In one case, a Liberal advertising firm netted commission for handling a transaction between the federal government and a crown corporation. Hardly necessary for passing a cheque within the same organization.

Paul Martin, who was finance minister at the time, defended against wrongdoing by declaring that he didn’t know what was going on.

Are we to believe that $100 million gets passed between the coffers of the federal government and Liberal Party supporters without the minister of finance knowing about it? If that’s the case, Paul Martin had failed as finance minister. The most basic job of the minister of finance is to balance the books. Doesn’t a $100 million discrepancy jump off the page? The other scenario, of course, involves Paul Martin’s cognizance of what was happening, in which case he is also at fault.

So now the Liberal party and members of the Paul Martin’s federal government will now be under criminal investigation for fraud yet they are already guilty for violating the trust of the Canadian people.

“This is so outrageous, what happened here, I don’t know how anybody can take this lightly,” — Sheila Fraser