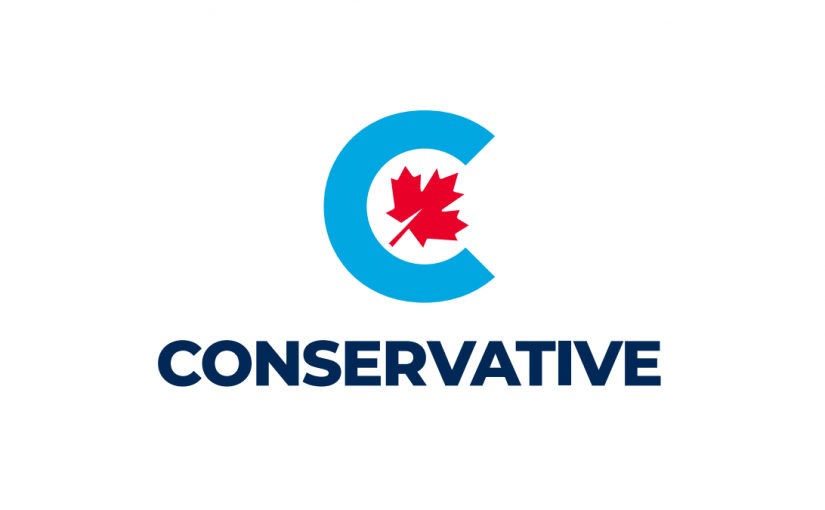 The leader of the Conservative Party is Pierre Poilevre. He was elected by the the party membership in September 2022, after the resignation of Erin O’Toole following caucus removal under the Reform Act. Candice Bergen, a Manitoba MP, served as interim leader and Leader of the Opposition in Canada’s Parliament.

Pierre Poilievre is a Member of Parliament from Ontario and represents the riding of Carleton.

Poilievre was born in Calgary, and was adopted as an infant. He is married to Anaida (Ana) Poilevre, who was born in Caracas, Venezuela.

Poilievre served as the Minister of Employment and Social Development in the government of Stephen Harper.

In British Columbia, federal support mostly goes to the BC Liberal Party which is a coalition of Conservatives and Liberals in opposition to the other major provincial party in BC, the BC NDP.

The official colour of the Conservative Party of Canada is blue (#0F2D52). The official secondary colour is red (#EA0029).

Prior to interim leader Candice Bergen, there have been 5 leaders of the Conservative Party of Canada.

Erin O’Toole was elected leader of the Conservative Party in 2020 and contested the 2021 federal election. He was leader of the Party from August 24th, 2020 through until February 2nd, 2022.

Andrew Scheer, the Former Speaker of the House of Commons, led the Conservative Party in the 2019 election and held office as leader of the Opposition from May 27th 2017 to August 24th 2020.

Interim Conservative Leader Rona Ambrose held office as Leader of the Opposition from November 5th, 2015 to May 27th, 2017.

Dr. Grant Hill served as interim leader of the newly formed Conservative Party, and Leader of the Opposition from January 9th, 2004 to March 20th, 2004.

What does the Conservative Party Stand For?

The Conservative Party has often been seen as a party of fiscal discipline, emphasizing balanced budgets and limited government spending that does not exceed economic growth. This principle was significantly challenged during the 2008 economic crisis, however, the government returned to fiscal balance by 2015.

The Conservative Party has maintained a policy of compassionate social policy. In recent history, this has included same-sex marriage, and abortion rights. That said, the social conservative grassroots of the party have sought to change the party’s stance on abortion, with little success. Stephen Harper pledged not to legislate on the issue and maintained the status quo throughout his time as Prime Minister, while Andrew Scheer, despite his personal convictions, also maintained the Conservative policy.

On same-sex marriage, the Harper government position was to preserve the newly won right to marry for same-sex couples. However, in order to allow the party to move on from the issue, Harper made a compromise with social conservative members to allow one final unwhipped vote on the issue, knowing the initiative to overturn same-sex marriage rights lacked majority support in caucus.

An initial lack of clarity on social issues dogged Andrew Scheer in the 2019 election prompting subsequent leader Erin O’Toole to speak unequivocably in support of the Canadian status quo on both gay rights and abortion rights.

Conservatives favour individual rights and responsibilities versus a collectivist approach. This is reflected in Conservative support for freedom of speech, worship, and assembly, support for due process and property rights. Individual responsibility favours being held personally reponsible for our actions. This is often reflected in the Conservative approach to criminal justice and the principle that Canadians provide for themselves (instead of having government provide for them). As a founding principle of the party, Conservatives also believe that all Canadians are equal.

The Conservative Party was founded with a belief in honouring Our Sovereign (the Queen) as the Canadian head of state and to honour and protect the traditions of Canada’s monarchy. Conservatives believe in the institution of Parliament and the democratic process.

Conservatives favour the decentralization of power meaning in practice that those that make decisions on the behalf of Canadians should do so closer to where Canadians live, when possible. Provincial decision making is favoured.

Though the modern Conservative Party does not have strong representation in French speaking parts of Canada, the founding principles emphasize the equality of English and French in Canada and their use in federal institutions.

How many seats does the Conservative Party have?

How do I join the Conservative Party of Canada?

Why are Conservatives called ‘Tories’?

‘Tory’ is a colloquialism from British political tradition. The term origination as an insult from the Irish tóraí which means ‘one who is pursued [as an outlaw]’. In England, the Tories and the Whigs were the opposing factions to the Exclusion Crisis of 1678–1681. Whig was also an insult which meant ‘cattle driver’. The nickname for the Conservative Party of Canada’s chief rival – the Liberal Party – is ‘grit’, which is a wholly Upper Canadian invention that originated in 1850 from the ‘Clear Grit’ movement.