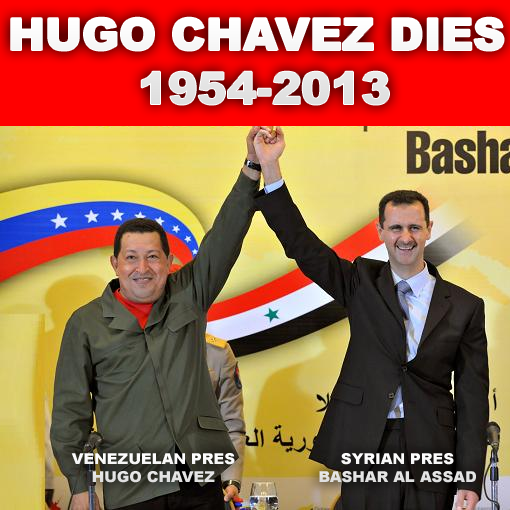 “I would like to offer my condolences to the people of Venezuela on the passing of President Chávez. Canada looks forward to working with his successor and other leaders in the region to build a hemisphere that is more prosperous, secure and democratic. At this key juncture, I hope the people of Venezuela can now build for themselves a better, brighter future based on the principles of freedom, democracy, the rule of law and respect for human rights”

Sid Ryan, President of the Ontario Federation of Labour,

“A great leader of poor and impoverished people has passed on. RIP.”

Fareweil Hugo Chavez: Thank you for helping usher in a new era of hope and democracy in global south. Latin America will never be the same!

On a personal basis, I had very good relation with him. He did his best… Always Chavez tried to have normal elections. Some people would say it was not completely normal but it was much better than other countries that were officially communist

“I mourn a great hero to the majority of his people and those who struggle throughout the world for a place.”

Meanwhile an average Venezuelan writes why he will not miss Chavez:

1. Your authoritarian manner (which reflected a flaw probably most Venezuelans have), and your inability to engage in an honest dialogue with anyone that opposed you. Even from your death bed, you had a Supreme Court justice fired because she didn’t agree with your politics.

2. Your disrespect for the rule of law and your contribution to a climate of impunity in Venezuela. In 1999, you re-wrote the Constitution to fit your needs, and yet you violated it almost on a daily basis. With this example, it is no surprise that crime exploded in Venezuela. In 14 years, our homicide rate more than tripled from 22/100K to 74/100K. While judges were busy trying to prove their political allegiance to you, only 11% of homicides led to a conviction.

3. Your empty promises and the way you manipulated many Venezuelans to think you were really working for them. In 14 years you built less public housing than any president before you did in their 5 year periods. Hospitals today have no resources, and if you go there in an emergency you must bring with you everything from medicines to surgical gloves and masks. The truth is that you were better at blowing your own trumpet than at getting things done.

4. The astounding level of corruption of your government. There was corruption before you got elected, but normally a government’s scandals weren’t made public until they handed power to the opposing party. Now we’ve heard about millions and millions of dollars vanishing in front of everybody’s eyes, and your only reaction was to attack the media that revealed the corruption. The only politicians accused of corruption have been from parties that oppose you, and mostly on trumped up charges. For example, Leopoldo Lopez was never condemned by the courts but you still prevented him for running for office. His crime? Using money from the wrong budget allocation to pay for the salaries of teachers and firemen -because your government withheld the appropriate funds.

5. The opportunities you missed. When you took office, the price of oil was $9.30, and in 2008 it reached $126.33. There was so much good you could have done with that money! And yet you decided to throw it away on corruption and buying elections and weapons. If you had used these resources well, 10.7% of Venezuelans would not be in extreme poverty.

6. Your attacks on private property and entrepreneurship. You nationalized hundreds of private companies, and pushed hundreds more towards bankruptcy. Not because you were a communist or a socialist, but simply because you wanted no one left with any power to oppose you. If everyone was a public employee, you could force them to attend your political rallies, and the opposition would not get any funding.

7. Your hypocrisy on freedom and human rights. You shut down more than 30 radio and television stations for being critical of your government, you denied access to foreign currency for newspapers to buy printing paper (regular citizens can’t access foreign currency unless you authorize it), you imprisoned people without trial for years, you imprisoned people for crimes of opinion, you fired tens of thousands of public employees for signing a petition for a recall referendum and you denied them access to public services and even ID cards and passports.

8. Your hypocrisy on the issue of Venezuela’s sovereignty. You kicked out the Americans but then you pulled down your pants for the Cubans, Russians, Chinese and Iranians. We have Cuban officers giving orders in the Venezuelan army. Chinese oil companies work with a higher margin of profit than any Western companies did. And you made it clear that your alliances would be with governments that massacre their own people.

9. Your hypocrisy on the issue of violence. You said this was a peaceful revolution but you allowed illegal armed groups like Tupamaros, La Piedrita and FBLN to operate. You gave them weapons. You had the Russians set up a Kalashnikov plant in Venezuela. You were critical of American wars but yet you gave weapons to the Colombian guerrilla, whose only agenda is murder and drug-dealing.

10. Your hypocrisy on democracy. Your favorite insult for the opposition parties in Venezuela was “coupists”, but you forgot you organized a coup in 1992, and the military that was loyal to you suggested they would support a coup in your favor if the opposition ever won the presidential elections. There was no democracy in your political party: you chose each of the candidates for the National Assembly and for city and state governments. When the opposition won the referendum that would have allowed you to change the Constitution in 2007, you disavowed the results and you figured out a way to change the articles and allow yourself to be reelected as many times as you wanted. You manipulated the elections in 2010 to make sure the opposition didn’t get more than a third of seats in Parliament even though they got 51% of the popular vote. Your democracy was made of paper, you made sure there were no meaningful checks and balances and all institutions were your puppets.