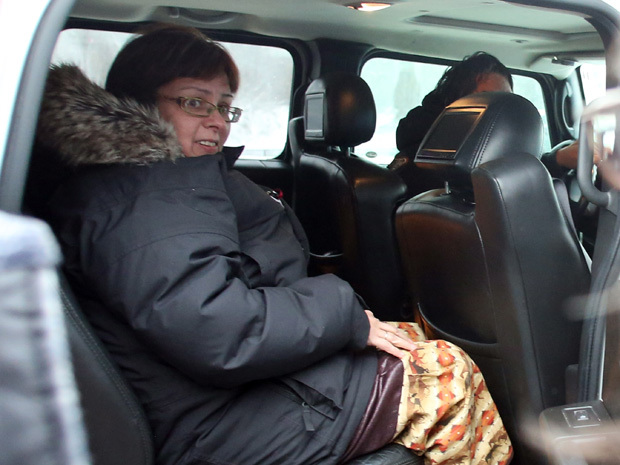 Are those video screens in the headrests of Theresa Spence’s SUV? Is that her SUV?

Not only this, but we’ve learned that Spence has been staying in hotels during her stay in Ottawa.

And that “hunger strike”? We all now know that it consists of fish broth, herbal tea, and whatever else Spence consumes in her teepee on Victoria Island, in the comfort of an SUV, or in her hotel room.

Other observers have fairly pointed out that she has not lost much weight for being on a hunger strike for about 30 days. I’m not for fat-shaming any person, but the hunger strike is the central news claim and it appears that this claim, and the threat to herself, are false.

The alleged hunger strike is to show that Spence is adamant about having a meeting with Prime Minister Stephen Harper. When the Prime Minister agreed to such a meeting, she backed off and moved the goal posts, asking for the Governor General to attend as well. When the Governor General re-iterated his non-administrative role in government, the #Idlenomore movement dug in their heels and threatened to call the whole meeting off. Spence even petitioned the Queen.

The Spence news event happened during the news vacuum that usually happens between mid-December through late January when the House of Commons isn’t sitting. It also comes during a time that ramps up to the release of a Deloitte audit of Attawapiskat. The audit’s last possible day of release was to be January 16th, however it was unveiled this week. It was quite damning of the administration of funds at the Attawapiskat First Nation. Over 80% of the money was unaccounted for and/or lacked supporting documentation. According to the audit, some unnamed contractor made over $300,000 for one unknown job. Who was this contractor? One named contractor is Spence’s boyfriend who is paid over $850 a day to manage the town’s expenses. He’s doing a bang-up job, isn’t he?

Since Spence must have known the quality of the Attawapiskat books, was this hunger strike a ploy to gain political capital ahead of the audit’s release?

Would we tolerate such accounting in any other municipality in Canada? In other cases such as this, the RCMP would be investigating.

Is #Idlenomore a political movement that is supposed to highlight poverty on reserves, one that calls for self-determination, self-governance, and independence from Ottawa? Why then is Theresa Spence living large on Ottawa’s dollar while her people freeze in inadequate housing?

News crews have now been evicted from Victoria Island and one from Global News was even removed from Attawapiskat.

As Canadians, we demand accountability and transparency from our elected officials. Why wouldn’t we demand the same from First Nations politicians?

Grand Chief David Harper of the Okimakanak First Nation described Theresa Spence as their very own “Mother Theresa”. I don’t remember reading reports of the Calcutta nun rolling on 20″ rims.

UPDATE: That SUV Spence is riding in? It’s a Hummer H2 (confirmed by @ggottawa). Fred Chartrand (the photographer) replies to my inquiry: “it is definitely the big, full tint Hummer!”

UPDATE: Here’s a little infographic I whipped up for my Facebook page.